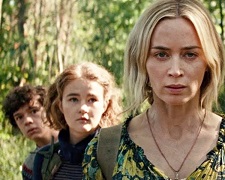 Released in 2018, A Quiet Place was easily one of the top 10 movies of that year.  It’ll be compulsory viewing to fully understand this follow-up.  If looking for an abridged summary, it was set in a world which had been attacked by alien grasshopper-like creatures who kill anything that makes a sound.  A four-person family had taken refuge in a small country home where every part of their routine had been altered so as to make as little noise as possible.  It was a fascinating premise which asked the question - could you go the rest of your life without making a single sound if your survival depended on it?

A Quiet Place: Part II picks up where the last film left off.  The Abbott family home has been destroyed and they’ve set off to find somewhere equally safe.  Their travels take them to a dilapidated factory which is home to Emmett (Murphy), an old family friend who has also spent the last year of his life hiding away in a well-fortified basement.  He’s now there alone given his wife recently passed away due to illness.

In the same vein as the original, director John Krasinski builds suspense through the lack of dialogue, sound effects and music.  There’s a scene where the family are hiking along a forest path and they must carefully consider each step to avoid the sound of crackling leaves and snapped branches.  It’s an intense sequence where cinematographer Polly Morgan (Lucy in the Sky) zooms in on their bare feet and lets the images do the talking.  It reiterates that silence is one of the most effective tools in making audiences feel uncomfortable.

The film’s second half borrows from a well-used formula and splits the characters up to create more subplots and more tension.  A few parts are predictable but it still works.  Krasinski weaves the stories together, increases the tempo, and gives us a fast-paced, edge-of-your-seat thriller that will take your breath away.  The special effects and sound crews deserve similar praise in creating some of the creepiest aliens we’ve ever seen on the big screen.  Their hideous faces and piercing shrieks will not be easily forgotten.

Emily Blunt (The Devil Wears Prada) won a Screen Actors Guild Award for her performance in the first film and, once again, she’s terrific as the resilient mother who will stop at nothing to protect her family.  The two likeable youngsters, Millicent Simmonds (Wonderstruck) and Noah Jupe (Ford v Ferrari), have more to do this time around and it’s cool to see their inquisitive/courageous characters develop into quasi-action heroes.

I’m normally sceptical of a sequel that relies on the same hooks and tricks as the original and while yes, that’s partially the case here, A Quiet Place: Part II is still exceedingly better than other action-thrillers coming out of Hollywood.