Review: In the Heights 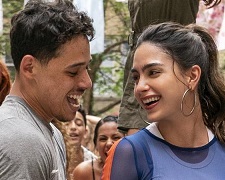 The uber-successful stage musical Hamilton made creator Lin-Manuel Miranda a household name but it was In the Heights that launched his career.  He was just a 19-year-old studying theatre at an arts college in Connecticut in 1999 when he came up with the idea of a musical set in Washington Heights, a Latino based community in Upper Manhattan close to where he grew up.  He still lives in the area today.

Having worked on the music for several years, the show finally debuted off-Broadway in 2007 before moving to the lucrative Richard Rodgers Theatre on West 46th Street (the same theatre later used for Hamilton) one year later.  There’s no questioning its critical and commercial success.  It won four Tony Awards, including best new musical and best original score, and ran for on Broadway for close to three years.

In the same vein as other profitable musicals, In the Heights has now been transformed into a big-screen movie for a wider audience to enjoy.  Quiara Alegría Hudes, who wrote the book for the original musical, has modernised the plot to make it a closer reflection of current day times in Washington Heights.  The director reins were handed to Jon M. Chu who is quickly building a strong resume on the back of Now You See Me 2 and Crazy Rich Asians.

There are many themes explored in the movie but for me, the ones resonating most strongly deal with home, family and community.  Usnavi (Ramos) is a 20-something-year-old from the Dominican Republic who, not long after his birth, immigrated to the United States with his parents.  His folks passed away when he was young and, having been raising by a feisty surrogate grandmother (Merediz), he now runs a small, shabby corner store in “The Heights”.

Usnavi finds himself torn between two worlds.  Part of him wants to stay in New York with his good friends, his cheeky cousin, and the woman he’s had eyes on for years, Vanessa (Barrera).  The other part of him wants to return to the Dominican Republic, follow his family roots, and revive a rundown beachside bar once owned by his late father.  Where is “home” and what does he want to do with the rest of his life?

There’s no shortage of subplots to keep the large ensemble busy.  There’s a young woman studying at Stanford, a father running a taxi company, a group of gossiping women in a hair salon, a budding fashion designer, a lovestruck man working in car dispatch, a struggling uncle, and a mobile food vendor specialising in piraguas.  It’s a lot to take in but if you can follow the fast-paced lyrics in the opening 8-minute musical number, you’ll learn the background of each character.

The narrative is a touch “light” in that there are no real villains (the closest we get is someone overcharging for dry cleaning) and not much in the way of suspense.  I’d also argue it’s a formulaic love story lacking originality.  All of that said, I enjoyed the cast, the locations, the songs and the themes.  It has a wonderful, infectious energy with a splash of emotion in the final act.  Everyone will have a personal favourite when it comes to performances but it’s hard to go past Olga Merediz as the loving matriarch.

If a fan of musicals, In the Heights is one you’re likely to watch again and again.

You can read my chat with director Jon M. Chu by clicking here.