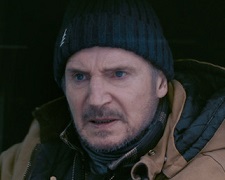 Some will be familiar with the reality television series Ice Road Truckers that ran for 11 seasons between 2007 and 2017.  It followed a group of truck drivers who, needing to access remote parts of North America during winter, would drive their heavy vehicles on frozen lakes and rivers.  It’s an occupation that is both fascinating and scary.  I don’t know if I’d have the nerve to do it!

It was only a matter of time before the idea was used in a Hollywood feature film and, having seen him successfully operate a snowplow in 2019’s Cold Pursuit, it seems fitting that action-hero Liam Neeson steps into the shoes of the lead character.  He plays Mike McCann, an American truck driver who could use some extra cash to look after his brother (Thomas) who is struggling from aphasia after several years in the military.

There’s been a mine explosion in northern Canada which has trapped roughly 20 miners in a tunnel below the surface.  The only way to get them out is with a special welding machine and about 300 feet of pipe.  The equipment is too heavy to fly in by plane and so, a group of 4 drivers are offered a lucrative contract of $50,000 each to transport it from the United States to Canada via truck.  Nice work if you can get it, right?

Well, not quite.  There are two problems.  Firstly, this is taking place in April and with the warmer temperatures starting to unfreeze/weaken the ice, this is not the time of year you want to be taking trucks with heavy loads on frozen rivers.  Secondly, there’s no alternative because the clock is ticking.  Corporate big-wigs know the trapped miners have limited air supply and so the drivers must take the shortest routes and go as fast as possible or else their rescue efforts will be pointless.

It’s a decent idea for a movie and there’s enough realism in the opening half to make this a suspenseful action-thriller.  It’s not all smooth sailing (as you’d expect) and this diverse group of drivers must navigate their way out of tricky scenarios.  I enjoyed watching them discuss their backgrounds, the risks of what they do, and then the fast-paced nature of their decision-making process.  When the ice is breaking up beneath them, there’s no time for doubt and hesitation.

Regrettably, the film loses its way in the second half and degenerates into a non-sensical, cliché-laden mess filled cheesy villains and dumb motives.  That’s as much as I can without giving away spoilers.  The dialogue falls away also and it reaches the point where Neeson says to a co-worker – “It’s not about a money now.  This is personal.”

Writer-director Jonathan Hensleigh has a history of penning popular action movies including Jumanji (the 1995 original), Armageddon, The Punisher and Welcome to the Jungle.  The Ice Road starts promisingly but lacks the stamina to go the full distance.