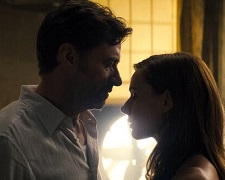 Reminiscence shows us a future world ravaged by the effects of climate change.  Many have become nocturnal.  It’s so oppressively hot during the day, people stay inside and then venture out at night for work and socialising.  The polar ice caps have melted, sea levels have risen, and low-lying streets of major cities are now flooded.  High rise buildings are still occupied but it’s commonplace to travel by boat instead of car.  Huge dam walls prevent the disaster becoming even greater.

The climate has degenerated but innovation still thrives.  A technology now exists that allows specially trained people to tap into one’s memories and allow them to be replayed.  For example, if you wanted you reflect on the time you first met your best friend, you strap yourself into a giant sensory deprivation tank, fall asleep, and let an expert probe your mind and recreate the memory.  It’s as addictive as any drug with customers doing it regularly to provide a fleeting moment of happiness in an increasingly depressing world.

As thought provoking as the backdrop is, it’s not the focus of Reminiscence.  Rather, this is a more conventional film (unfortunately) that is part mystery, part romance.  Hugh Jackson plays Nick, a memory reader with a struggling business and a single frustrated employee (Newton).  I’d be annoyed if a new customer came into my office after closing time without an appointment… but that’s not what happens when Mae (Ferguson) walks in looking for a short, standard treatment.  It’s love at first sight for Nick and the pair soon become inseparable.

That is until Mae goes missing.  Nick is tormented by her disappearance and spends every waking hour trying to work out where she’s gone.  It reaches the point where he sits in his own tank and relives his memories of Mae with hope that he’ll find a key clue.  The pieces of the puzzle start fitting together but it sends Nick down a dangerous road filled with dangerous people.

I like the reflective questions Reminiscence asks of audiences.  What if this technology did exist?  Would you want to go back and relive happy moments from your past?  Or does it create a world where we detach from reality, stop looking forward, and risk creating no new memories?  Could authorities and villainous folk have the opportunity to see “recordings” of these memories and use them against us?

Writer-director Lisa Joy (Westworld) can’t quite bring everything together into something meaningful and emotional.  We see so little of Nick and Mae together.  This makes it tough to understand why he’s willing to risk his life for someone he hardly knows.  Scenes involving gangsters and goons are run-of-the-mill and the same can be said of weak subplots involving police detectives fishing for information, and a wealthy family looking for happiness.

There’s decent banter between Thandiwe Newton (my pick of the cast) and Hugh Jackman but Reminiscence doesn’t make the most of its great ideas.