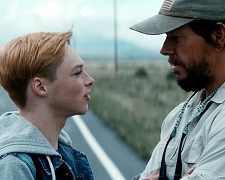 Based on a true story from 2013, the film opens with Joe Bell (Wahlberg) and his 15-year-old son, Jadin (Miller), hiking on a remote stretch of road.  He’s not walking to work or to the corner store.  His goal is considerably more ambitious.  Joe is on a mission to trek across the contiguous United States from his west coast home in La Grande, Oregon to his son’s favourite place, New York City, on the east coast.  It’ll take over a year and the entire distance travelled will exceed 6,000 kilometres.

Armed with just a push trolly and a backpack, Joe isn’t doing this because of a simple sense of adventure.  His son has been bullied at high school for being gay and he wants to raise awareness about the issue and to try to prevent it from happening to others.  In each town he visits, Joe talks to news reporters and speaks in front of kids at school auditoriums.  He’s not the best public speaker but his heart is in the right place.

Without giving too much away, Joe Bell is an emotional, thought-provoking piece that has something to say.  The screenplay was developed by Diana Ossana and Larry McMurtry, the Oscar winning duo who adapted Brokeback Mountain for the big screen, and the director is Reinaldo Marcus Green, a New Yorker who has transitioned from Wall Street banker to budding filmmaker.  His only other feature film was the well-received Monsters and Men from 2018 starring John David Washington.

Curiously, the least interesting character in Joe Bell is Joe Bell himself.  I was fine with the performance of Mark Wahlberg (Boogie Nights) and the film isn’t afraid to expose his flaws but he’s very one-note.  The Joe we meet at the start of the movie isn’t too different from the Joe we know at the end of the movie.

There are two characters with much more to offer.  The first is the 15-year-old Jadin who is fleshed out beautifully by rising star Reid Miller.  His background is explored using flashbacks and we’re shown affecting scenes where he comes out to his dad, is viciously tormented by classmates, and meets his first love.  Miller is exceptional (he’s a name to watch going forward) and it’s hard not to be moved by a particularly emotional sequence where, at a vulnerable low point, he calls his best friend and begs for help and support.

The second character of note is Lola Bell, mother to Jadin and husband to Joe.  Wonderfully played by Connie Britton (Friday Night Lights), she becomes the “voice of reason” and the person trying to pull strings and hold the family together when times get tough.  It’s easy to applaud Joe for his visible efforts in raising awareness about bullying but Lola’s unsung work behind the scenes, which takes its toll on her at times, deserves equal recognition.

Reviews were mixed when the film premiered at the 2020 Toronto Film Festival (it even went through a subsequent re-edit) but, in my opinion, Joe Bell is a moving drama that deserved more recognition than its received.