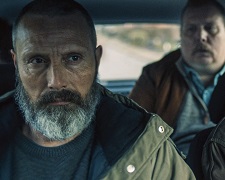 At some point in the late 1990s, an award-winning short film maker and an aspiring actor got into a heated argument on a staircase at a party in Denmark.  It wasn’t resolved until two high profile actresses intervened and hit them with their handbags.  Like something out of a movie itself, this odd first encounter kick started a friendship that endures today.

The two people I’m referring to are writer-director Anders Thomas Jensen, an Academy Award winning in 1999 for best live action short film, and well-known Danish actor Mads Mikkelsen, star of this year’s Oscar winner for best international feature, Another Round.  These two are clearly aligned when it comes to creative vision and good storytelling.  Jensen has now made 5 feature films and each one has starred Mikkelsen.  Their most notable outings have been Flickering Lights (2000) and Adam’s Apples (2005).

Riders of Justice is their latest collaboration and it’s a brilliant, original, funny, surprising movie that flips the action hero genre on its head.  We saw a similar idea explored successfully earlier this year with Nobody – a Bob Odenkirk led action-comedy about a boring family man who reluctantly battles the bad guys.  This film goes much further in terms of its hilarious setting and its brutally dark material.  They’re joking about stuff you shouldn’t joke about… but it works!

The narrative is centred around a tragedy.  A crowded passenger train strikes a parked freight train and 11 people are killed (it’s a quick, jarring moment).  One of those killed is the wife of Markus (Mikkelsen), a respected soldier on tour in Afghanistan.  He immediately returns home for the funeral and to look after their teenage daughter, Mathilde (Gadeberg), who is struggling to reconcile the unfortunate series of events.  Her mum would not have been on the train that afternoon if not for the fact the family car broke down.

A survivor of the train crash was Otto (Kaas), a skilled but socially awkward actuary who has forged his career by calculating risk and odds.  He’s stunned to learn that the key enemy of a powerful motorcycle gang was also killed in the crash and so, it leads him to believe this was no accident or coincidence.  Foul play must be involved.  The police disagree and it leads Otto, along with two close friends, to approach Markus and express their views.

It reaches the point where Markus, Otto, and their band of misfits go after the dangerous motorcycle gang in search of revenge.  Their journey sends them down some bizarre, amusing paths.  For example, in trying to keep their plans a secret from the suspicious Mathilde, one of the men pretends to be a psychologist and, in the process, gets everyone to “open up” and deal with their guilt and grief.  It’s both farcical and profound!

Mads Mikkelsen gets the opportunity to play the “straight man” and it frees up the rest of the cast to win big laughs.  It’s a terrific ensemble with Lars Brygmann getting the best of the material as a foul-mouthed computer hacker who yearns to become a hitman.  Bookended by a thought-provoking moment involving a girl and a bicycle, Riders of Justice has a lot more to offer than your standard action flick.  This is comfortably one of the year’s best films.