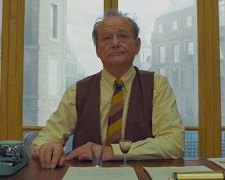 Some filmmakers try to tell a good story with interesting characters. Other filmmakers do the same but add their own “director’s stamp”. Wes Anderson fits into the later category. I don’t think there’s another director working today who is as distinctive and obvious as Anderson. Anyone with a half-decent knowledge of film could watch the first 5 minutes of The French Dispatch, sans credits, and know who directed it.

The film opens with the narrator (Anjelica Huston) informing us of the death of Arthur Howitzer Jr (Murray), an American based in France who, for many years, has produced and edited a widely read newspaper called The French Dispatch. His will specified the newspaper will cease upon his passing and so, his hard-working journalists and staff have cobbled together one final issue for readers to enjoy.

The movie is then divvied up into three separate short stories with each one representing an article in the paper’s final edition. The first involves a prison inmate (del Toro) who paints nudes of a security guard (Seydoux) and becomes an internationally renowned artist. The second is centred on a student protest led by two not-so-experienced revolutionaries (Chalamet and Khoudri). The final tale revolves around the kidnapped son of a high-profile police officer (Amalric) and the importance of his gifted chef (Park).

The journalists covering these worthy stories are respectively played by Tilda Swinton, Frances McDormand and Jeffrey Wright. There’s a myriad of other well-known, award-winning cast members who were clearly happy to contribute a day of their time for the chance to work with Anderson, even if just for a single scene. This list includes Elisabeth Moss, Henry Winkler, Christoph Walz, Liev Schreiber, Edward Norton and Saoirse Ronan.

I’ve long been a fan of Wes Anderson but The French Dispatch is one of his least engaging efforts. It feels like a torrent of over-the-top narration and flashy adjectives. This makes it harder to connect with the characters and understand their motivations and emotions. There are glimpses of something deeper (like when Frances McDormand opens up about the lonely life of journalist) but not enough to make this a winner.

It’s been over five months since The French Dispatch premiered at the 2021 Cannes Film Festival and there’s now enough evidence to suggest this is Anderson’s most divisive film. Some are including it in their annual “top 10 list” and hyping its chances for next year’s Academy Awards. On the flip side, I spotted at least 20 walkouts during the sold-out public preview screening I attended here in Brisbane.

I’ll admit the quirky nature of the three stories lingered with me long after leaving the theatre (that’s a good thing) but if Anderson intended this to be a “love letter to journalists” then I’m not sure it’s a box that can be fully ticked.