Review: The Worst Person in the World 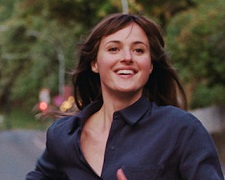 I was in a Brisbane book store earlier this week (late Christmas shopping) and saw a section entitled “motivation” that was filled with hundreds of self-help/advice books on an array of topics.  It illustrates that when it comes to life, there’s no one-size-fits-all rule.  We’re all different people with different personalities from different backgrounds.  Books can provide useful guidance but when it comes to finding happiness in life, we’ve all got our own separate path.  It’s something we have to find ourselves.

This is a key theme in the memorably titled The Worst Person in the World, a new movie from acclaimed Norwegian filmmaker Joachim Trier (Reprise, Oslo August 31st).  The central character is Julie (Reinsve), a 29-year-old from Oslo who is still searching for love and a career.  It’s not for lack of trying.  She’s just very non-committal.  Like a kid in a toy store, she’ll devote her sole attention to something for a fleeting moment… before something else catches her attention and the process repeats.

Trier’s film is split into 14 identified parts – a prologue, 12 chapters, and an epilogue – which serve as short stories and provide a glimpse into Julie’s world.  She stumbles her way through several jobs, argues with her family, and falls in love with two different guys, Aksel (Lie) and Elvind (Nordrum).  The film’s tone is forever shifting with moments of comedy (she publishes an article on oral sex), moments of drama (people battling terminal cancer), and moments that fit somewhere in between.

As a love of great romantic comedies, Trier set out to make one where it’s not simply about a woman looking for man but rather one which shows how different partners can bring out different things within.  With a traditional rom-com, you often know who the protagonist will end up with (as one guy ends up being a complete schmuck which makes it an easy choice.  That’s not often the case in real life and it’s certainly not the case in The World Person in the World.  It’s refreshing to watch a realistic romantic tale which doesn’t follow well-worn formulas.

The three leads are terrific with Renate Reinsve taking much of the spotlight with her superb performance as Julie.  She won the best actress prize at the Cannes Film Festival and earned a nomination at the European Film Awards.  In an incredibly competitive year for non-English language cinema, the movie has been submitted as Norway’s entry for the upcoming Academy Awards (and I’d love to see it earn a nomination).

With intelligent, insightful, honest dialogue between the characters, The Worst Person in the World is one of the more interesting and thought-provoking movies releases this year.  Worth your money.