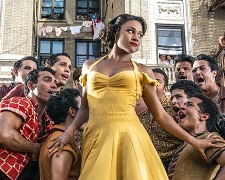 Applying the same criteria, West Side Story lands somewhere in the middle.  On one hand, you could look at this project with cynicism.  The stage musical debuted in 1957 on Broadway and has since been performed in countless countries across the world.  The movie adaptation from 1961 won 10 Academy Awards (one shy of the all-time record) including best picture.  74-year-old director-producer Steven Spielberg has the financial resources to create any movie and so why go with a relatively safe remake a widely-regarded classic?  What’s he hoping to gain aside from more money in the bank account?

It turns out Spielberg may get the last laugh after all.  As we’ve seen with everything from Hamlet to Frankenstein, if a story is good enough, it can be told repeatedly and still woo audiences.  So why this particular work?  Spielberg was just 10 years old when his father bought the Broadway cast album of West Side Story.  After listening to it repeatedly on the family record player and memorising every song, it became his “favourite musical”.  Having never made a movie musical across his 50-year career, this new adaptation is his chance to refresh the story and impart his love for the material on a new generation.  We can call it part of his “legacy".

Spielberg hasn’t gone for a full-nuke modern transformation.  Tweaks have been made to the order of the songs and who sings them, a new key character is introduced (played by Rita Moreno), and a little more background information is provided (such as why the gang war begins in the first place).  That said, it’s still set in the mid-1950s in Manhattan’s Upper West Side, and it still utilises the iconic music of Leonard Bernstein and lyrics of Stephen Sondheim.  It feels like you’re watching something both old and new at the same time – and I like that vibe.

If you’re new to the story, West Side Story is a modernised take on William Shakespeare’s Romeo & Juliet (which itself has been told a gazillion times).  Two teenage gangs, one with white Americans and the other with immigrant Puerto Ricans, fight for control of their neighbourhood and their way of being.  As the battle goes on, a once-incarcerated boy from one side falls in love with a virtuous 18-year-old girl from the other side and, rather than defusing the situation, it only adds to the tension between the rival groups.

This is one of the year’s best films and there’s so much to love about it.  The cast are extraordinary.  Mike Faist as Riff was my personal favourite but not far behind are Rachel Zegler as Maria, Ariana DeBose as Anita, and Rita Moreno (who won an Oscar for appearing in the 1961 movie) as the “keep looking for better” Valentina.  The 89-year-old Moreno will break the toughest of hearts with her climactic performance of “Somewhere”.

The technical elements are also top-notch.  The costumes help build the narrative (note the differences between the gangs and then the use of white of Maria), editing is used selectively (really enjoyed the longer takes), and the cinematography/choreography used in elaborate music numbers like “Gee, Officer Krupke” and “Cool” create a vibrant, infectious energy.  Many will be downloading the soundtrack after seeing it.

I’m normally someone who prefers surprising, original cinema but West Side Story proves an “old school” tale can be just as good when backed by a talented cast and crew.