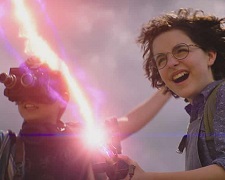 At the Brisbane premiere of Ghostbusters: Afterlife, a brief interview was played with director Jason Reitman (Up in the Air) where, in addition to asking people not to reveal spoilers, he spoke of it being about family above all else.  It’s an accurate statement.  In front of the camera, we see a story centred on a fractured household in search of fresh start.  Behind the camera, Reitman is following in the footsteps of his own father, Ivan, who directed and produced the two Ghostbusters movies from the 1980s.

This new film, which ignores the 2016 all-female reboot, takes place in a small, isolated town called Summerville, Oklahoma.  It’s best described as “the place that time forgot”.  Schools use video cassette recorders when delivering classes, residents go to a drive-in diner when looking for fast food, and one of the characters uses an instant camera to take photographs.  Even if you haven’t seen the earlier Ghostbusters flicks… there’s still plenty of nostalgia on offer.

Callie Spengler (Coon) and her two children, Trevor (Wolfhard) and Phoebe (Grace), don’t want to be there.  They have no choice though as they family is flat broke.  They were evicted from their previous apartment but thankfully/conveniently, they’ve inherited a farm in Summerville following the death of Callie’s estranged father.  The house is a filthy, run-down dump but at least it’s a place to live.  It also serves as an opportunity for Callie to “pick through the rubble” of her dad’s life and create a few final memories.

It’s the children who do most of the digging and that’s why the story is largely told from their perspective.  You could therefore describe it as a knock-off of Stranger Things (and I’m not just saying that because of the casting of Finn Wolfhard).  Trevor and Phoebe realise their grandfather was an original Ghostbuster, do some background research, learn about the funky ghost-busting equipment, and then get called into action when villainous ghosts pop up in town.  It’s up to the kids to save the world!

Ghostbusters: Afterlife was released in the United States back in November and pulled in over $120 million USD at the local box-office – decent figures for an industry suffering from the impacts of COVID-19.  It shows there’s still juice in this orange.  The original movies developed a cult-like following (there are Ghostbusters fan clubs all over the world) and existing devotees should enjoy this new tale and its many easter eggs.  Youngsters and other newcomers can have just as much fun with plenty of great one-liners on offer.  Paul Rudd (Ant-Man) gets the best of the jokes as a lazy school teacher.

It could have used more tension in places, especially during the big climax, but Ghostbusters: Afterlife pitches itself as wholesome family entertainment and delivers by offering something for all ages.