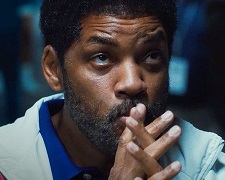 My first reaction after King Richard was one of surprise.  It wasn’t surprise about the film’s quality but rather, surprise that Venus and Serena Williams would sign-off, in their role as executive producers, on a movie which provides a not-always-glamorous look at their father.  There’s a lot which is left out (his previous marriage for example) but given professional sport is becoming increasing sanitised (negative press is tightly controlled to protect commercial revenues), it’s nice to see behind the curtain and be reminded what goes on behind the scenes.

You can look at this movie through several different lenses.  For example, you could come away and think Richard Williams (Smith) was an inspired genius.  He described himself as being in the “champion raising business” and, having written a 78-page plan to turn his kids into superstars, would devote countless hours each day to their training.

There was no shortage of motivation but money was a barrier.  Richard would fish old tennis balls out of bins, use run-down public tennis courts, and personally coach them himself based on his learnings from magazines and video tapes.  They couldn’t afford country club memberships or professional coaches.  If you love a great “rags to riches” tale, this is one to soak up and enjoy.

The real Venus and Serena Williams speak highly of their father (he sacrificed so much for them) but they’ve publicly acknowledged the ecosystem of their family wasn’t perfect.  The controlling, strong-willed Richard didn’t appreciate his views being challenged.  Rightly or wrongly, he’d argue with coaches, officials, potential sponsors, his kids and his wife, Brandy (Ellis).  When it came to “being humble”, he didn’t always practice what he preached.

Richard is the film’s focus but Brandy is the most intriguing character.  She’s the mediator of the family – sometimes required to bite her tongue while sometimes voicing her valid concerns.  An argument between Richard and Brandy (it takes place in a kitchen) is perhaps the film’s best scene and highlights why both Will Smith and Aunjanue Ellis are on track to earn Academy Award nominations in a few weeks.

It leans a little too much in one direction but King Richard also asks audiences to think about the relationship between parents and young kids when it comes to sport.  Some just want their kids to have fun and make friends whilst other push hard with hopes of making them high-paying professional athletes.  This tale has a happy ending but for every Venus and Serena Williams, there’s the story of a child pushed too hard who “burns out” and loses their love for both the sport and their family.  It’s a fine line.

The film is unnecessarily melodramatic in places.  A moment where a gun-wielding Richard is “saved” by a farcically convenient drive-by shooting is the best example.  Another scene where he prophetically tells a forlorn Serena that she’ll be “the greatest of all time” also feels over-the-top.  For the most part though, this a tight script from first-time writer Zach Baylin which features realistic dialogue and memorable one-on-one conversations between the characters.  The banter between Richard and a continually frustrated coach (humorously played by Jon Bernthal) provides a valuable injection of comedy.

I also like the narrow attention in terms of timeline.  We don’t go beyond Venus’s professional debut as a 14-year-old.  The Williams sisters won a combined 30 grand slam singles titles and it’s easy to find highlights and interviews related to those wins by looking on YouTube.  There’s no point recreating that in cinematic form.  Instead, King Richard opens our eyes to their upbringing (which we don’t know as much about) and the barriers which needed to be overcome.  Most should enjoy this.