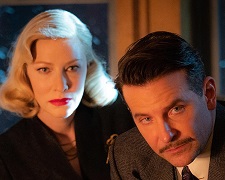 You can’t have everything you want in life… but that hasn’t stopped Stan Carlisle (Cooper) from trying.  When the film opens, he’s accepting a job as a carny for a travelling carnival show and within two years, he’s become a wealthy, successful clairvoyant who is dazzling well-to-do audiences in New York City.  He also has a devoted wife (Mara) who, despite her own unhappiness at times, continues to offer love and support.

Stan is a “glass half empty” kind of guy.  Many would be comfortable with the career he’s built but, just like a thief who is chasing one big “last score”, he sees a risky opportunity to increase his wealth further and decides to take it.  He teams up with a psychologist (Blanchett) and, for a substantial fee, they try to fool a renowned judge into thinking he can communicate with their dead son.  Given the judge’s reputation in the community, it’s a job that could backfire in a big way if Stan’s fraudulent methods were to be exposed.

Nightmare Alley is based on a 1946 novel from American author William Lindsay Gresham.  It was made into a movie one year later by director Edmund Goulding but that film was a critical and financial failure.  Oscar winning director Guillermo del Toro (The Shape of Water) was introduced to the book in the 1990s by friend/colleague Ron Perlman and after a long wait, he teamed up with his soon-to-be wife, Kim Morgan, to create a fresh adaptation for filmgoers who enjoy a good drama-thriller.

The film is somewhat of a departure from del Toro.  Having built a reputation making strange fantasy movies with monsters, ghosts and other strange creatures, Nightmare Alley sticks to the realms of reality.  In fact, while some of the gullible characters in the movie are led to believe in the existence of something supernatural, we know from the outset that Stan is a confidence trickster.  Some of the best scenes in the movie are where he learns his trade from an experienced, booze-loving veteran (Strathairn) and his kind-hearted wife (Collette).

A few parts to the story feel contrived (to forcibly push the narrative in a certain direction) but for the most part, this is a likeable effort where you’re never quite sure what’s around the next corner.  It’ll keep you interested.  It’s bolstered by a terrific cast headlined by Bradley Cooper (A Star is Born) and Cate Blanchett (Blue Jasmine).  The exchanges between the pair, with each trying to sneakily get the upper hand over the other, are fun to watch.  Blanchett recently earned a Screen Actors Guild Award nomination for her worthy performance.  She’s having a great year on the back of her scene-stealing endeavours in Don’t Look Up.

Nightmare Alley is an old-school tale told with precision.