Review: The Eyes of Tammy Faye 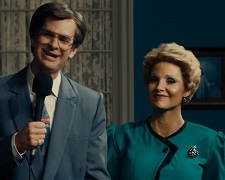 They say you should never talk about politics and religion… but since both are covered in The Eyes of Tammy Faye, I’m in a position where I have no choice.  It’s based on the true story of Jim and Tammy Faye Bakker, played in the film by Andrew Garfield and Jessica Chastain, who rose to fame in the late 1970s when they created a successful evangelical Christian television network called PTL (the acronym for Praise The Lord).

At the height of their success, the pair would raise roughly $100 million USD per annum for the Assemblies of God church, but as we see in the film, deserved questions were asked about where the money ended up.  Waterfront mansions, expensive clothes, lavish holidays, large salaries and even larger bonuses were questioned by the Internal Revenue Service and the Department of Justice.  It’s amazing what they were able to get away with for so long with such little scrutiny.

I wish we had a chance to see part of this story told from the other perspective, that of the investigating authorities, to fully appreciate the gravity of what went down.  Instead, we things largely through Tammy Faye’s deluded eyes (no pun intended) where she thinks this is all “above board” given the magnitude of the donations they generate and the value of their preaching to the community.  She truly believes she’s doing God’s work – there’s no doubt about that.

Using a 2000 documentary of the same name as the source material, The Eyes of Tammy Faye is the creation of screenwriter Abe Sylvia (Nurse Jackie) and director Michael Showalter (The Big Sick).  It’s clear that they want to tweak the public’s opinion and portray Tammy Faye as a misunderstood woman who deserves a level of compassion and sympathy.

A key sequence highlights the work she did for the gay community in destigmatising AIDS, much to the disgust conservative preachers and the influential Republican Party.  There’s another moment where she displays her feminist qualities by loudly pulling up a chair and, despite the lack of an invite, sitting at a table of influential men.  Even when Tammy Faye strays from her own righteous path, like a scene where she has a quick fling with a young music producer, justification is offered – it’s her husband’s fault for not loving her enough, or to hedge your bets, maybe he’s gay?

Jessica Chastain (Zero Dark Thirty) picked up her sixth Golden Globe nomination in the past decade for her leading performance.  There’s no question that she’s done a great job recreating the voice and extraverted personality of the real Tammy Faye Bakker.  Showalter drums this home in the film’s final scene by putting the two side-by-side.  It’s just a shame the screenplay doesn’t place more scrutiny on the character or the messed-up world of evangelicalism in general.  That would have made it a far more interesting production.