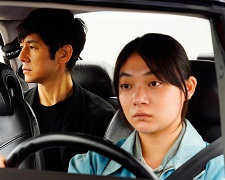 Drive My Car has been slowly building its support base since it premiered last July in competition at the 2021 Cannes Film Festival.  The jury, headed by Spike Lee, gave it the award for best screenplay.  In the months that followed, it won the top prize at the Asia Pacific Screen Awards and was named best movie of the year by critics’ associations in Los Angeles, New York and Boston.  It’s now a short-priced favourite to win the Oscar for best international feature in late March.

I love the irony that a movie which such a simple, innocuous title could offer up such complexity.  It’s a Japanese drama about an acclaimed theatre actor, Oto (Gorô), staging an unorthodox production of Anton Chekhov’s acclaimed play, Uncle Vanya.  Across the film’s epic three-hour run-time, he interacts with a curious assortment of people including his wife, fellow actors, and a person employed to be his driver.  Oto cannot drive himself due to having a damaged optic nerve in one eye.

There’s some strange, head-scratching stuff in this.  You couldn’t accuse of it having stale, cliched characters.  You’re unlikely to forget the unusual “creative process” employed by Oto and his wife when coming up with new ideas.  Equally memorable is a young, attractive male actor who becomes part of Oto’s latest production but carries both secrets and baggage.

So what’s the point of it all?  If the finale is anything to go by, Drive My Car may be a tale of grief above all else.  Oto is like a character is one of his stage shows – a tortured artist who has made mistakes and is stuck in an endless search for redemption.  His work serves as both a help and a hindrance.  He cathartically opens up to those around him (that’s good) but his mental scars limit the flexibility and creativity he brings to the rehearsal room (that’s bad).

Drive My Car is adapted from a 2014 short story authored by Haruki Murakami.  That itself wasn’t enough material for a full-length feature film and so writer-director Ryusuke Hamaguchi pulled from other Murakami works to create a more substantial drama.  Audiences with knowledge of Chekhov’s work will also pick up on the intermingling of themes between the characters in Drive My Car and the characters they play on stage in Uncle Vanya.

Parts feel unnecessarily long and drawn out (I wished there was a fast-forward button) but there’s much to digest and much to like here.  An interesting offering.