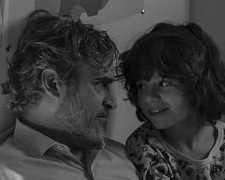 55-year-old writer-director Mike Mills has always had a love for artists who were honest, open and revealing, and it’s a major reason why he’s drawn heavily from personal experiences in crafting his last three movies.  Beginners, which won Christopher Plummer a long overdue Academy Award, was inspired by his father who came out as gay at the age of 75.  His follow up, the brilliant 20th Century Women, featured a lead character based on his late mother (star Annette Bening wore her actual jewellery).

Mills became a father himself in early 2012 and C’mon C’mon was born from his learnings as a dad and the “powerful intimacy” that develops between a parent and their child.  The central protagonist here is Johnny (Phoenix), a radio journalist working on a major project where he interviews tweens across the United States and asks them about their thoughts on the world and where it’s heading.  This too is drawn from Mills’ life since he completed a similar project for the San Francisco Museum of Modern Art in 2013 and was surprised by the “dark” answers provided by some of the interviewees.

The unmarried Johnny spends a lot of time speaking to children but has none of his own.  It’s not something that bothers him.  He seems content living alone in his New York City apartment and pouring time and energy into his work.  That changes when Johnny gets a call from his not-so-close sister (Hoffmann) asking if he can look after her 8-year-old son, Jesse (Norman), for a few days in Los Angeles while she deals with issues relating to her separated husband (McNairy).

The bulk of the film is spent watching the pair interact.  Jesse is sharp and inquisitive but also a little weird and rebellious.  He’s at that loss-of-innocence age where he’s starting to understand his own emotions and the impact he can have on others.  Johnny finds the “babysitting” experiment to be both rewarding and exhausting.  It’s the first time in his life he’s been responsible for a child’s wellbeing and he soon relishes the chance to shape his nephew’s future by passing on his own wisdom and values.  Sometimes it's as simple as treating Jesse to great local pizza.  Sometimes it’s as complex as answering Jesse’s probing questions about his knotty relationship with his sister.

The performances are all outstanding.  British (you wouldn’t know it from his accent) newcomer Woody Norman was just 10 years of age when the film was shot in late 2019 and is a revelation.  The banter between he and Joaquin Phoenix (Joker) is so natural and effortless that it’ll make you wonder if it was all improvised (it wasn’t).  Gaby Hoffmann (Now and Then) is also terrific as the anxious mother.  The frank back-and-forth between Hoffmann and Phoenix where they open up about parenting is both humorous and insightful.

Shot in black-and-white to help give the film an “iconic, fable-like quality”, the memorably titled C’mon C’mon is another high point in the career of Mike Mills.  The way he can make audiences care so deeply about characters in the space of two hours is a skill many other filmmakers struggle to master.