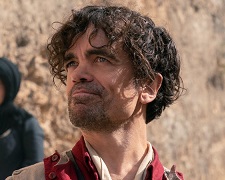 “Oh, what a tangled web we weave, when first we practice to deceive!”  The line is from Scottish poet Sir Walter Scott but it could also be used to describe the plot of Cyrano, a movie based on a stage musical based on the play.  The original source material is Cyrano de Bergerac, a romantic tale set in the 17th century authored by French dramatist Edmond Rostand and first performed in Paris in 1897.  The work has been adapted many times of the screen including Roxanne, released in 1987 and starring Steve Martin, and a 1990 French version which earned 5 Academy Award nominations including a nod for the iconic Gérard Depardieu.

Those familiar with previous iterations will know it’s centred on an intelligent man with an unusually large nose, Cyrano, who doesn’t believe he’s attractive enough to land the woman of his dreams, Roxanne.  The pair have been friends for many years with Cyrano never revealing his true feelings.  Then along comes Christian, a young, good-looking military man who captures Roxanne’s eye.  Christian asks for Cyrano’s help in wooing Roxanne and, when one lie leads to another, we end up with a love triangle that becomes increasingly complex with each passing day.

Writer Erica Schmidt was commissioned to transform Rostand’s play into a musical and it was first performed in Chester, Connecticut in 2018.  The biggest change in her adaptation is that she’s ditched Cyrano’s ridiculously large nose and made his perceived weakness less obvious.  The Cyrano we see is of short stature and it’s why he’s so insecure about his appearance.  This change also allowed Schmidt to cast her husband, Emmy-winning actor Peter Dinklage (Game of Thrones), in the lead role (call it nepotism if you want but Dinklage is still terrific).

Director Joe Wright (Atonement) saw the stage musical and reached out to Schmidt with hopes of bringing it to the big screen.  This is the end result and, as we’ve seen with other recent Hollywood musicals, it tries to preserve the intimacy of the story while making things a little grander in terms of sets and costumes.  Dinklage and Hayley Bennett (The Magnificent Seven) reprise their roles from the stage and have been joined by Kelvin Harrison Jr (Waves) and Australian Ben Mendelsohn (Animal Kingdom) in the key supporting roles.

It’s an old-fashioned story which has been beautifully told.  Like something out of a Shakespearean comedy, the characters humorously skirt around the bleeding obvious without harnessing the courage to express their inner thoughts.  It’s something many will relate to – a classic fable of unrequited love.  You can sense Cyrano’s love for Roxanne (“even her imperfections are perfect”) but understand his timidness when comparing himself to the handsome Christian.  His secret love letters also remind us how the pen can be mightier than the sword.

The songs, sung live on set as opposed to in a sound stage, have been cleverly constructed by Aaron and Bryce Dessner (music), and Matt Berninger and Carin Besser (lyrics).  They don’t fall into the trap of being over-written and instead, keep things simple and offer insight into these characters and their deepest feelings.  They may not be as memorable as a West Side Story but they suit the film’s tone.

Musicals have found it tough going at the box-office over the past year and, while Cyrano may meet the same fate, it’s still worth your time and attention.

You can read my interview with star Kelvin Harrison Jr by clicking here.