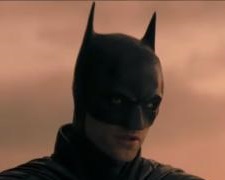 It’s a stretch at 2 hours, 56 minutes but to the film’s credit, it doesn’t waste time on a long-winded introduction establishing Batman’s origins.  We know he’s Bruce Wayne and that he was orphaned at a young age.  We know he’s a filthy rich recluse and is aided by a loyal butler.  We know he goes out at night to help rid Gotham City of its gangsters and criminals.  If you’ve seen one of the many cinematic interpretations of this character (there’s even a LEGO version), none of this is new information.

So… it’s straight into the story and the action.  Gotham is as corrupt as it’s ever been and a masked man, known as The Riddler (Dano), is intent on exposing the dirty, powerful men behind it.  The mayor is his first victim and that’s followed by other respected, high-profile individuals who have been engaged in illegal activity for many years.

Some in the community see The Riddler as a hero but given the way he brutally kills his victims, as opposed to letting them have their day in court, Batman (Pattinson) paints him as a villain who must be identified and apprehended.  To paraphrase – “the city may be beyond saving but he has to try.”  Those offering support include police officer James Gordon (Wright), putting his neck out to provide Batman with access to crime scenes, and Selina Kyle (Kravitz), a well-connected nightclub bartender with hidden skills.

I’ve seen stronger stories.  The writers build early intrigue but the more it progresses, the more you realise it’s a simplistic tale of corruption with little nuance.  I hoped for more.  The Riddler could easily have been the most interesting character but we don’t spend enough time with him to understand his mindset and methods.  Without giving too much away, how did he orchestrate it all?  His key scenes generally involve gruesome/creative killings as opposed to insightful conversations with others.

Batman himself lacks complexity.  He’s so emotionless and forlorn that it makes me wonder how he gets out of bed of a morning!  Why does he keep doing what he’s doing?  We get a splash of detail through the use of narration but I wish the filmmakers delved more into his depressing nature as opposed to sequences where he cases crime scenes quicker than Sherlock Holmes and solves riddles faster than a Mensa member.

The limitations of the screenplay are offset by the stellar direction of Matt Reeves (Cloverfield, Dawn of the Planet of the Apes) and cinematography of Australian Grieg Fraser (Zero Dark Thirty, Dune).  I lost track of the number of times I thought “whoa, that’s a great shot!”  It all takes place at night (I’m not sure when these characters sleep) and it allows them to make great use of light and shadow in creating a stylish superhero movie.  Kudos also goes to the editing team of William Hoy and Tyler Nelson for using their tools selectively instead of abundantly.

Creating enough points of difference to distinguish itself from the successful Christopher Nolan-helmed Batman trilogy, The Batman is dark, interesting… and a little frustrating.