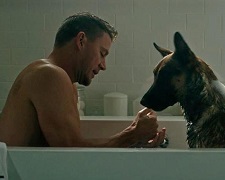 Jackson Briggs (Tatum) is a pill-popping, ex-U.S. Army Ranger who is struggling with post-traumatic stress disorder (PTSD) after several overseas tours.  He has trouble sleeping, gets blurry vision, and often has a ringing sensation in his ears.  He needs support, both physically and mentally, but doesn't want to ask for it given his macho, shrug-things-off type mentality.

Support finally arrives but in an unlikely form.  When a close friend / fellow Army Ranger commits suicide, Jackson goes on a lengthy road trip down the western side of the United States, from Washington to Arizona, to attend his funeral.  He is accompanied by Lulu, the late Ranger’s dog who spent much of her life working as a military dog and is battling demons of her own.

You’ll know where this film is going from the outset.  It’s like the classic tale of two troubled people coming together, cathartically opening up, and helping each other in the process.  The slight catch is that one of them is a barking Belgian Shephard.  Three different dogs were used as part of the shoot (you’re unlikely to notice the difference) and I’ll give them credit – they’re well-trained and deliver convincing performances.  The best scenes in the movie are the one-on-one interactions between a frustrated Jackson and cheeky Lulu.  A good example is a sequence where they spend a rainy night in a rusty, rundown barn.

The rest of the film is a little iffy.  The screenplay finds it hard to straddle the line between being a light-hearted animal flick that kids can equally enjoy, and a darker tale of war, PTSD and suicide.  There’s a heavier subplot where Jackson is trying to reconnect with his wife (I think) and young daughter but it’s so woefully underdeveloped that you wonder why it’s included.  It’s as if they don’t want to probe, make Jackson unlikeable, and aggravate audiences.  A quick-fire shot of them all together at the very end is such a cop-out!

There’s the aforementioned “through-line” but Dog is largely structured as a series of short stories involving unconnected characters.  As the pair travel from town to town, they interact with an assortment of people including seductive spiritual healers, a pretentious police officer, a pair of weed farmers, a gullible hotel concierge, and a fellow military veteran with a dog of his own.  Again, some moments are better that others.  I laughed at a scene involving a reconciliation and a lollipop… but cringed at one involving a jail cell and a line-up.

It’s worth noting Dog marks the directorial debut of 41-year-old Channing Tatum (Step Up, Magic Mike) who teamed up with long-time friend Reid Carolin in bringing this project to life.  I don’t think it’s part of any major transformation (he’ll be sticking to acting in the short-to-medium term) but given the story is loosely based on a road-trip he took with his own dying dog in 2018, it’s understandable why he wanted to be more involved in the film’s creative process.

Pitched at those who love canines and feel-good crowd-pleasers, Dog is well-intentioned but not particularly deep or memorable.