Review: It Snows in Benidorm 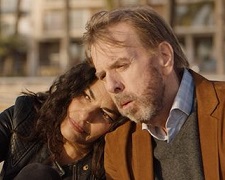 He’s never been nominated for an Academy Award and he’s never had a leading role in a big Hollywood blockbuster… but few would turn down the opportunity if offered the career of English actor Timothy Spall.  The 65-year-old has been in the business for over four decades and he’s worked under the guidance of directors including Mike Leigh, Kenneth Branagh, Cameron Crowe, Alfonso Cuarón, Tim Burton and Pablo Larraín.  He’s a gifted character actor with a knack for elevating the projects he’s involved with.

That’s again the case with It Snows in Benidorm, the latest from Spanish director Isabel Coixet (The Secret Life of Words, Elegy) which has been co-produced by Pedro Almodóvar (All About My Mother).  Spall plays Peter Riordan (Spall), a man who willingly admits his life is boring and unambitious.  He lives alone in a sparce apartment with no wife, no kids, and no pets.  He goes through the same routines each day and he’s worked as a bank manager for many years – a job that feels more of a monotonous, depressing chore than one offering hope and fulfilment.

These early scenes are terrific.  Spall, under the guidance of Coixet, creates a character who many with understand and empathise with.  It’s at this point where the film shifts tone and takes a different narrative path.  Pushed into early retirement, complete with a generous redundancy package, Peter decides to travel to Benidorm, a seaside holiday town in eastern Spain, to catch up with his brother for the first time in several years.

Within hours of his plane touching down, Peter realises something is amiss.  His brother has gone missing.  Unsure how worried he should be, he starts to ask questions but it’s difficult given he speaks no Spanish and knows very little about his brother’s work and lifestyle in Benidorm.  What follows is a curious, intriguing adventure.  Peter steps out of his comfort zone and learns as much about himself as he does about his brother’s location and wellbeing.

It Snows in Benidorm is an interesting tale that reminds us of the importance of romance, friendships, and general human connection.  Spall skilfully brings the character to life with splashes of narration helping us understand his insular nature.  His opening line is a great example – “neither the weather nor people can be trusted.”  You grow to care more about Peter’s wellbeing than that of his missing brother (one of the film’s unusual charms).

With a solid supporting cast, It Snows in Benidorm is two hours well spent at the cinema.