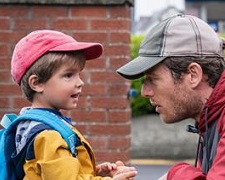 All long-time filmgoers have a handful of movies they’d describe as “hidden gems”.  I’m speaking of films you love despite the fact they didn’t fire at the box-office, weren’t beloved by critics, very few people have seen them.  An example I often refer to is Still Life, a tear-inducing British drama about a council employee (Eddie Marsan) who organises funerals for people who have died with no friends and family.  I named it my second favourite release of 2014 (behind Boyhood) and yet, it took in just $9,481 at the box-office in the United States.

Italian filmmaker Uberto Pasolini was the gifted writer-director behind Still Life (he’s also an Academy Award nominee for producing The Full Monty) and now, for the first time in almost a decade, he’s back behind the camera and making another terrific film.  Several years ago, Pasolini picked up a newspaper and read a short article about a single father with a 4-year-old son.  The dad had a terminal illness and, with no immediately family and just a few months left to live, he had to help pick an adoptive family to raise his child.  That tale became the bones for Nowhere Special.

You don’t even need to see this movie to appreciate the emotion involved with such a story.  Just picture yourself in the same situation.  With the clock ticking, imagine the pressure of having to choose someone to raise your 4-year-old child.  What if you make the wrong choice?  Another question to be answered is what you elect to leave behind in a “memory box” if the child grows up and wants to learn more about his biological father.  So as not to create a lingering sense of sadness, would it be better if the kid didn’t know anything at all?

Pasolini doesn’t milk this story any harder than needed.  Tears will flow regardless.  We just follow the window-cleaning father, John (Norton), as he teams up with good-natured social workers in “auditioning” new parents for his son, Michael (Lamont).  Intermingled with this, we have heartfelt scenes where father and son enjoy simple pleasures such as walking to school, attending a carnival, and eating fairy floss.  The kid is largely oblivious but we, as the audience, know the significance of these moments in the mind of the dying John.  In lieu of a physical villain, the “bad guy” is time and the lack of it that remains in John’s life.

James Norton (Happy Valley, Little Women) is sensational in the lead role and deftly illustrates the emotions from such a situation – from the deep love of a child to the growing fear of death.  It can’t have been easy extracting such an important performance from 4-year-old newcomer Daniel Lamont but Pasolini has done as well as can be expected.  Over 100 boys auditioned with Lamont deservedly getting the nod.

He’s not exactly a household name but Nowhere Special solidifies the reputation of Uberto Pasolini in my eyes as being a wonderful storyteller.