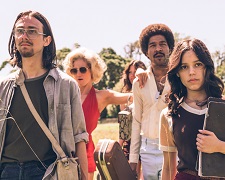 It’s at the half-way mark where X morphs from a comedy-drama into a violent horror flick.  Writer-director Ti West is no stranger to the genre having made films including Cabin Fever 2: Spring Fever, The Innkeepers and The Sacrament.  West uses well-trodden formulas here (such as splitting everyone up to create multiple subplots) but the characters act in a rational, realistic manner which gives the film credibility.  They’re not the sharpest tools in the shed but you’ll care about them more than you might expect (the interesting backstory helps).

I wasn’t as convinced by the “villains” but X is still an above-average horror movie with several moments that will catch audiences off guard.  It’s got a decent script, an energetic cast, and lots of style.  I had to laugh at a random split-screen musical interlude half-way through.  There’s another memorable moment, humorously shot by cinematographer Eliot Rockett, involving a naked Scott Mescudi standing outside the front door in the middle of the night.  These scenes highlight that the film is as light-hearted and entertaining as it is creepy and gory.

West was fortunate enough to get renowned American production company A24 to rely on economies of scale and put up the money to make two movies about these characters and their messed-up world.  They were shot back-to-back in New Zealand in early 2021 and, based on the early hype/success for X, we can expect to see the next instalment very soon.  A tease of this very different film (a prequel) is offered after the closing credits so be sure to stick around.