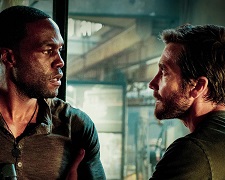 “People still rob banks?”  It’s a question asked half-way through Ambulance and it alludes to this movie being part action, part spoof.  The scenario we see played out here isn’t very realistic… but a flick about an elaborate, in-person bank heist, complete with a big shootout, is more likely to get the attention of action fans than something involving cybercrime and money laundering (more common today).

Not much nuance has gone into the screenplay.  Will Sharp (Abdul-Mateen II) is a “good guy” getting screwed over by health insurance companies who won’t stump up $231,000 for experimental surgery to help his ailing wife (Ingram).  With seemingly no other opinions, he reaches out to his estranged criminal stepbrother, Danny (Gyllenhaal), who conveniently needs an extra accomplice to help steal $32 million from a bank in central Los Angeles.

They’re doomed from the start but that’s largely their own doing.  Bringing in a new man just 5 minutes before walking out the door and putting plans into action… yeah, not the best idea.  Danny isn’t a great judge of character either.  The crew seem woefully underprepared to the point where one of them is wearing Birkenstocks.  They’re not the slick, sharp, shrewd group we saw in Michael Mann’s epic heist film, Heat.

The robbery goes poorly (no surprise there) and what follows is a 90-minute car chase where Will and Danny have commandeered an ambulance and drive through the packed streets of Los Angeles trying to evade the authorities.  In the back are two people they’ve kidnapped – a seriously wounded police officer they “inadvertently” shot (he’s just three months out of the Academy!) and a skilled, emotion-supressing paramedic (González) who rubs people up the wrong way (“no one wants to be your partner”).

The character development isn’t great and the moralistic, semi-redemptive arc provided to Danny is difficult to swallow.  It’s reminiscent of the Fast & Furious franchise in that it’s pushing “stick together” and “do it for the family” type themes.  People are in perilous, life-threatening situations and still have time for laughs and deep, meaningful conversations.

All of that said, this latest effort from Michael Bay (Bad Boys, Transformers) doesn’t ask you to take it seriously.  It even makes humorous reference to a past Bay film starring Nicolas Cage!  Ambulance warrants your attention because of its extreme, adrenalin-pumping car chases.  A great example is a creative scene where the paramedic performs open heart surgery with the help of Facetime on a phone with low battery while travelling at 60 miles an hour.

There’s decent tension in the film too.  From the initial robbery to the long pursuit, writer Chris Fedak (Chuck) finds enough twists and turns to keep audiences engaged.  Showing events from the perspective of both the escaping criminals and the hunting authorities also adds to interest levels.  Praise needs to go the way of two-time Oscar winning editor Pietro Scalia (JFK, Black Hawk Down) in weaving all the footage together in a way that feels hectic but still easy to follow.

A remake of a Danish film released in 2005, Ambulance has its issues but it’s still an energising entry to the action genre.

You can read my chat with director Michael Bay by clicking here.