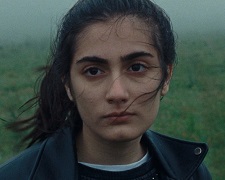 Kids know parents pay the bills but at what point growing up do they have a fulsome appreciation of their work and financial status?  It’s an answer that will vary significantly between families depending on the openness of the parents and the savviness of the children.  This question is front and centre in To Chiara, an Italian drama from writer-director Jonas Carpignano.

Set in the region on Calabria in southern Italy, events are told from the perspective of 15-year-old Chiara (Swamy Rotolo).  To help introduce us to the characters, the film opens with the 18th birthday party of Chiara’s older sister – an evening which has brought the wider family together for food, drinks, toasts, dancing and loud music.

Events following the birthday celebrations open Chiara’s eyes to a side of her father she never knew.  The reason they live in a nice home and have ample money is because dad is a drug runner for the local mafia.  The clues were always there (such as her dad having secretive conversations with shady men outside the front door) but Chiara had never previously connected the dots.  Perhaps she didn’t know.  Perhaps she didn’t want to know.

This newly found awareness is the best part of the film.  Swamy Rotolo, in her first significant film role, turns in a beautiful performance where facial expressions trump dialogue.  In the second act, the cops close in and Chiara’s father is forced to flee.  There’s a simple but powerful scene where she watches a TV news clip showing her father’s criminal dealings and you get a clear sense of her shock and confusion.  How can she go to school and face her friends with this information now public?

The script weakens in the later stages when it comes less of a family drama and more of a contrived Hollywood thriller.  Chiara, seemingly oblivious to the risks, goes down some dangerous paths and in search of her missing dad.  She meets a curious assortment of people and her eyes are opened to more of her father’s dealings.  How does she feel about it though?  If you knew a close family member was drug dealer, would you help support and protect them?

Drawing on learnings from his last two movies, writer-director Jonas Carpignano has developed an interesting approach to create authentic performances.  He generally uses non-professional actors and, if you’re wondering why so many of the actors in the closing credits have the same surname, it’s because the family we see in the movie is also a family in real life!  The story maybe fictional (don’t worry, they’re not really involved with the mafia) but the strong bond between these individuals is not.

Carpignano also kept them on their toes during the shoot by withholding plot details.  The movie was shot chronologically with actors only given information about their own characters (and not others).  There was also no rehearsal and so the reactions you see from the key players (such as when Chiara opens a hidden door) were, to use Carpignano’s own words, “fresh” and “spontaneous”.

Nominated for best feature at the 2022 Independent Spirit Awards (losing to The Lost Daughter), To Chiara can’t maintain its intensity all the way through but it’s still an interesting, provocative watch.