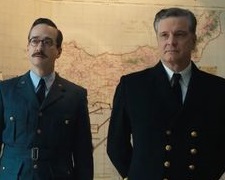 Operation Mincemeat reminds us once again that truth can be stranger than fiction.  It’s a tale of secretive military operations but it’s one that has been told before.  A book (The Man Who Never Was) was published in 1953 and a movie was made three years later.  Further details were made public in a 2010 non-fiction work from author Ben Macintyre and it’s that book which serves as the source material for this latest feature film.

Operation Mincemeat was the code name for an elaborate, borderline-farcical deception tactic orchestrated by the British military in the middle of World War II.  Allied forces were intending to invade Italy via Sicily in 1943 but the problem was, Germans knew about the strategy and were already guarding the territory.

To throw them off the track, the body of a dead British soldier was placed in the ocean off the coast of Spain with hopes it would wash to the shoreline and be inspected by high-ranking German officials.  In the soldier’s possession were fake documents and letters referring to the Allies’ secret intentions to invade Greece instead of Italy.  It was a long shot that required a lot of pieces to fall into place (luck is sometimes more important than skill) but it was hoped the Germans would believe the ruse and move their troops out of Sicily.

It’s a serious story but writer Michelle Ashford (Masters of Sex) and director John Madden (Shakespeare in Love) strive for equal amounts of humour and tension.  The plan is led by two unlikely people – a former British judge (Firth) and a Royal Air Force officer (Macfadyen) working for MI5.  Not everyone was a fan of the scheme but it had the blessing of Prime Minister Winston Churchill.

The better material in the film revolves around the chaos in pulling off such a crazy idea.  There’s a great sequence where they speak with a local coroner and try to find the “perfect” corpse which would be used.  They needed a body which could resemble a high-ranking British soldier but also one which no family member would come looking for.  They eventually settle on a homeless tramp who had died from accidentally eating rat poison!

The weaker scenes involve an unnecessary love triangle with a co-worker (Macdonald) which feel superfluous to the main narrative and have only been included to satisfy those in the audience looking for a splash of romance.  They don’t add much.  Instead, they could have focused more on the involvement of naval intelligence officer Ian Fleming (Flynn) who was using his work as inspiration for a series of spy novels.  We know him today as the creator of James Bond.

Targeted at those who enjoy an entertaining World War II tale, Operation Mincemeat isn’t fully satisfying but it’s still an interesting yarn to add to the memory bank.