Review: Lunana: A Yak in the Classroom 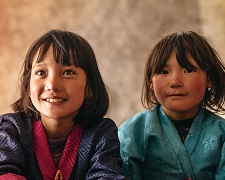 Of the five nominees for best international feature at the most recent Academy Awards, four have already been released in Australian cinemas – Drive My Car from Japan (the winner), Flee from Denmark, The Hand of God from Italy, and The Worst Person in the World from Norway.  The final nominee is about to get its chance and rounds out a brilliant quintet celebrating the best of non-English language cinema.

The oddly titled Lunana: A Yak in the Classroom is the first ever movie from Bhutan to earn an Oscar nomination.  It’s amazing to think that writer-director Pawo Choyning Dorji, making his feature film debut and working on a miniscule budget, was able to create something which has captured the world’s attention.  It’s a rare situation where the making of the movie is just as interesting as the movie itself.

It was shot in the village of Lunana, a tiny mountainous spot in northern Bhutan (5,000m above sea level) with a population of roughly 50 people.  It has minimal electricity and so the small crew relied on solar powered batteries to charge equipment.  Still, they only had enough power for one camera and didn’t have enough juice to look back at the footage of an evening.  Dorji has joked that it’s a rare film with a “zero carbon footprint.”

The government of Bhutan has prescribed that every child deserves an education and so the film is centred on a fictitious teacher from Bhutan’s capital, Thimphu, who is asked to travel to Lunana’s and teach roughly ten kids for a full year.  It’s described as “the most remote school in the world” and to get there is an eight-day hike (mostly uphill) through wet, muddy terrain.

The teacher’s name is Ugyen (Dorji) and it’s clear from the outset that he doesn’t want to go.  He’s giving up city life, where he has friends and family, and travelling to a freezing cold place with no internet or phone reception.  Did mention the stone houses don’t have windows?  Did I also mention that townsfolk use leaves when going to the bathroom because they don’t have toilet paper?

There’s a clear message here about appreciating the simple things in life.  Ugyen is embraced by the residents of Lunana who are immensely grateful that he’s educating their children.  You’d think he was a member of a royal family given how highly he is revered.  He’s gone from a busy city where you ignore and walk past hundreds of people each day… to a tight-nit community where everyone cares about everyone.

This dramatic change in lifestyle serves as an awakening to Ugyen.  He bonds with the adorable, good-natured children and feeds their hunger for learning.  There’s a great scene where the town comes together and builds a blackboard (which they’ve never had before) for the school’s sole room.  There’s another heartfelt moment where he orders blank exercise books from the city (they take weeks to arrive) and the kids have proper paper to write on for the first time in their lives.

Lunana: A Yak in the Classroom provides much to reflect upon.  It has something to say about educators and their importance in society.  It asks audiences to think about technology and how essential it is to our happiness (if at all).  It opens eyes to a beautiful yet largely unknown country.  It speaks about emigration and the belief, rightly or wrongly, that the grass is greener on the other side.

To successfully pack all of that into a 109 minute is a testament to Dorji’s filmmaking and storytelling strengths.  I can’t wait to see what he does next.