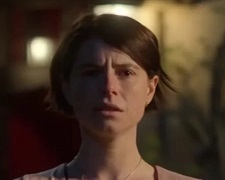 There are films where the good people get what they want, the bad people get what they deserve, and all the major subplots are neatly wrapped up.  Men is not one of those movies.  In the same vein as Mulholland Drive, Enter the Void, or Midsommar, it’s the kind of film that makes you go “what the hell did I just watch?”  That’s the best way of summing up by own confused, jolted view as the end credits unexpectedly started to roll.

Written and director by Alex Garland (Ex Machina), Men is a two-hander built around the great performances of Rory Kinnear (The Imitation Game) and recently minted Academy Award nominee Jesse Buckley (The Lost Daughter).  She plays Harper Marlowe, a woman who is on holidays in a small English town.  She’s rented an old-school cottage, complete with a piano and antique bathtub, and is there alone with just her thoughts, phone and laptop.

It’s a beautiful location but the reasons behind Harper’s trip are quite tragic.  Harper’s marriage had been on a wain and, after engaging in a passionate argument, it culminated with the husband (Essiedu) jumping from a balcony and committing suicide.  The widowed Harper is still coming to grips with the event (it’s a mix of confusion and grief) and the change of scenery will hopefully provide a few steps forward.  Providing emotional support is her best friend (Rankin) who regularly calls to talk about anything and everything.

She’d rather just keep to herself but Harper is forced to interact with a series of male townsfolk including the property manager, a bartender, a police officer, a vicar, and a naked stalker.  Every one of these characters is played by Kinnear – a convincing choice by Garland who uses a mix of make-up and visual effects to give them a distinctive look.  They all make Harper feel uncomfortable but in different ways and to different extents.

Whether you like it or not, the climax is a memorable one.  Garland has been cryptic in interviews and stated that the film has multiple interpretations – a deliberate decision on his part.  To directly quote Garland – “Does Harper see all men the same even though they’re not?  Or does she not realise that, in fact, they are all the same?”  There’s also stuff to think about in terms of trauma, its lingering impact, and the ways we overcome it.

I was looking for a touch more narrative but Men is to be praised as an original, unsettling drama-thriller that takes us out of our comfort zones.