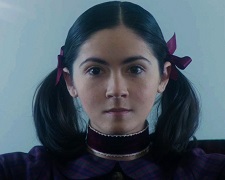 Released back in 2009, the original Orphan had its fair share of fans.  I was one of them.  It took in roughly $80 million at the global box-office (four times its original budget) and received critical praise for the lead performance of newcomer Isabelle Furhman.  In case you missed it, it told the story of an adult Estonian woman who, because of her short stature, posed as a 9-year-old orphan and was adopted by an American family.  Suffice to say, her motives were not healthy (it was a horror film after all).

It’s been a 13 year wait for Orphan: First Kill which is set a few years prior to the original and therefore serves as a prequel.  Leena (again played by Furhman) escapes from a psychiatric hospital in Estonia and, after scouring the internet for missing persons around her age, decides to pose as an American named Esther Albright who went missing four years earlier.  She is transported to the United States and reunited with the Albright family – dad Allen (Sutherland), mum Tricia (Stiles), and older brother Gunnar (Finlan).

It’s hard to give this story any credibility.  You’d think someone within the family (or perhaps the authorities) would catch onto the fact that, while there are similarities, Leena is not Esther.  It’s not like she was a baby when kidnapped!  Were there no moles or birthmarks to check?  What about a standard DNA test?  Was anyone going to investigate her claims about being kidnapped?  Anyway, Leena/Esther weaves her way into the family (despite acting super weird) and it’s not long before she’s bonding with dad via art lessons in the studio.

About half-way through the film, the writers serve up an interesting twist which got my attention.  I won’t spoil but this singular moment is the best part of the movie.  It almost justifies buying a ticket to see it.  The problem thereafter is the film retreats back into the nonsensical and becomes even less coherent.  Was a bunch of stuff left on the cutting room floor?  The most ridiculous scene is where Leena/Esther decides to flee the house in the middle of the night but, upon reaching the lawn outside, has an abrupt and unexplained change of heart.

The more you think about Orphan: First Kill, the less sense it makes.  Filled with poorly developed characters, specialist horror director William Brent Bell (The Boy) fails to create something equally to its predecessor.