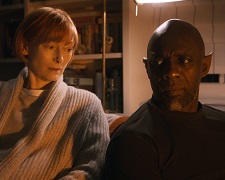 It’s been almost ten years since I first saw Ang Lee’s Life of Pi and I still can’t get its brilliant finale out of head.  An interviewee tells two stories – one layered with rich, interesting, far-fetched fantasies, and the other filled with simple, painful realism.  He then poses a question back to the interviewer – “which story do you prefer?”  The answer reminds us that a fictitious tale can often yield more power and more resonance than one told solely using facts.

This same argument is at the heart of Three Thousand Years of Longing, the latest creation of renowned Australian director George Miller (Happy Feet, Mad Max).  The source material is a short story authored by English writer A.S. Byatt which was first published in 1994.  Sensing its potential as a feature film, Miller bought the rights to the novel back in the late 1990s and now, having finished a varied bunch of other projects, he’s finally found time to bring Byatt’s work to the big screen.

Oscar winner Tilda Swinton (Michael Clayton) continues her trend of playing quirky characters by stepping into the shoes of Alithea Binnie, a renowned academic who has spent much of her life studying stories and the way they change over time.  In a theme-setting opening sequence, she speaks to a packed audience about how, over time, myths have been replaced with facts.  To use a simple example, generations of people thought the world was flat but now, thanks to the wonders of science and other knowledge gained, we know that’s not the case (apologies to conspiracy theorists).

It’s at a small gift store in Istanbul where Alithea purchases a small, odd-shaped bottle as a memento of her time in Turkey.  Back in her hotel room, she opens the bottle in her bathroom and out pops a genie played by Idris Elba (Beasts of No Nation) who grants her three wishes.  Referred to as a Djinn (an old Arabic word used to describe genies), he quickly covers off the ground rules (you can’t wish for more wishes).  Interestingly, Alithea can’t wish for something simple like a glass of water.  She can only ask for what her heart desires.

It’s a curious conundrum for the astute Alithea who now finds herself stuck within one of the ridiculous, impossible-to-believe fables that she’s been studying for decades.  In true academic fashion, she uses it as an opportunity to inquire and learn.  Rather than think about her three wishes, she shifts the focus onto the Djinn and asks about his 3,000-year background and other wishes he has granted.  What follows is a series of visual, colourful flashbacks which help enlighten an intrigued Alithea.

I can’t help but draw comparisons with Life of Pi and, in doing so, find it to be the weaker and less challenging of the two efforts.  It’s pushing its repetitive messages very early on and I never developed a strong, heartfelt connection with the needing-to-be-saved Alithea we see in the current day.  The limitations of the screenplay are offset by the impressive direction of George Miller who uses an array of cinematic techniques (the cinematography of John Seale deserves a mention) to add flair and polish.

The early box-office figures out of the United States have been underwhelming and it’s likely that Three Thousand Years of Longing will be seen as a weaker entry on Miller’s stellar resume.  There’s an audience for this type of movie but I suspect it’s not a big one.