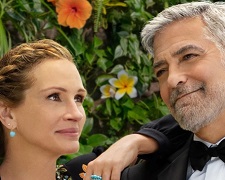 David (Clooney) and Georgia (Roberts) have been divorced for 19 years and yet their hatred for each other is as strong as ever.  Caught in the middle is their only child, Lily (Dever), who has delicately navigated the situation for two decades but now, on the eve of her college graduation, has decided to throw a cat among the pigeons.  They asked to sit on different sides of the auditorium for the graduation ceremony but Lily has arranged for her parents to sit by side-by-side on the upper balcony.  As expected, it doesn’t go well.  Insults fly and they bicker about trivial details (like who gets priority in using the seat’s armrest).

With the stage set, writers Ol Parker and Daniel Pipski find a way of bringing these two back together in pursuit of a common goal.  Lily flies off to Bali for a post-college holiday and there, she falls in love with the setting, the lifestyle, and a local man named Gede (Bouttier).  She impulsively decides to give up on a law career, remain in Bali, and get married.  All of this is communicated to her parents via email along with news the wedding ceremony will take in four days’ time.  Both David and Georgia think it’s an insane decision and so they agree to put aside their differences, fly to Bali, and convince their daughter to give the idea more thought.

They agree to stay “lockstep” with a “Trojan Horse” approach.  They’ll pretend to be happy about the upcoming nuptials while secretly sabotaging events in the background.  Their most devious act is to steal the wedding rings, which were blessed with sacred water, and have Gede’s family think the wedding is cursed.  It’s not their only tactic.  David spends time with Gede and, in talking about the “horrors” of his own marriage, hopes his soon to be son-in-law reconsiders his decision.

This is as corny, cheesy and formulaic as a romantic comedy can get.  You can foresee the outcome of every major plot point long before the inevitable finale.  This may have worked with some strong set pieces but unfortunately, the misadventures of these characters have been poorly conceived.  This is best illustrated during a moment where an aggressive dolphin bites David while on a boat cruise.  It’s a poorly directed scene which is light on laughs and even lighter on relevance.

Ticket to Paradise offers positives in terms of both the cast and setting.  George Clooney and Julia Roberts have worked together several times (Ocean’s Eleven, Money Monster) and their experience shows here.  The material isn’t great but they still do an admirable job in schmoozing audiences.  While set in Bali, much of the film was shot here in Australia with idyllic locations on the Gold Coast and Whitsunday Islands serving as the backdrop and helping create a fun, relaxed, wish-I-was-there vibe.

Playing it super safe and taking few chances, it’s a shame the creatives behind Ticket to Paradise didn’t follow in the footsteps of the characters and make a few unexpected, less-predictable decisions themselves.