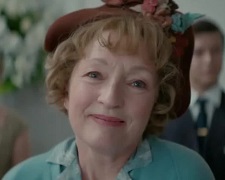 The much-loved Mrs. Harris was the creation of American author Paul Gallico who penned four novels about her adventures between 1958 and 1974.  Mrs. Harris Goes to Paris is an adaptation of the first book and is part of a small collective of films with rhyming titles.  Other entries include The Cat in the Hat, Drop Dead Fred, Hocus Pocus, and Mr. Magorium’s Wonder Emporium.  If we’re being technical, this isn’t a new entry though.  Fans of the late Angela Lansbury may remember she starred in a largely forgotten television movie based on Gallico’s work back in 1992 (Mrs. ‘Arris Goes to Paris).

Academy Award nominee Lesley Manville (Another Year, Phantom Thread) steps into the shoes of Ada Harris and it’s a role that requires her to be sweet and loveable.  The year is 1957 and after losing her husband during World War II, she’s spent the last 13 years as an “invisible” widower living in London who goes about her routine days with minimal fuss and fanfare.  She works as a poorly paid housekeeper before finishing most evenings with a drink amongst loyal friends at the local pub.

It’s while in the home of a snobby client that she first lays eyes on a £500 dress crafted by French designer Christian Dior.  It’s one of the most beautiful things Mrs. Harris has ever seen and, in a temporary moment of madness, she decides to travel to Paris and purchase a similarly exquisite dress for herself.  She doesn’t have the money but a few convenient plot devices take care of that – she wins a tidy sum playing the Pools, she gets a reward for finding a missing ring, and she receives a 13-year back-paid war widow’s pension.  It all adds up to £582 which is enough to cover the cost of the dress plus flights.

Much of the film is then spent in Paris where Mrs. Harris unwittingly charms her way into the lives of others.  She is initially looked down upon by Dior’s snobby management but once they see her cash-laden purse, perceptions change and she’s welcomed with open arms.  It will take roughly two weeks to complete the fitting and design and so Mrs. Harris spends her time sightseeing around Paris in the company of a wealthy nobleman (Wilson), an astute accountant (Bravo), and a budding model (Baptista).

One could easily think this was written by Hans Christian Anderson given it has the look and feel of an over-the-top fairy tale.  There are a few bumps along the way but for the most part, it’s filled with happy, smiling people who have a part to play in helping Mrs. Harris fulfill her unusual dream.  It’s a crowd-pleaser but there’s so much sugar and syrup that it’s difficult to swallow at times.  Mrs. Harris has an uncanny knack for bumping into people at “just” the right time, and her connections with key individuals (such as the wealthy nobleman) feel more contrived than authentic.

All of that said, I’m a long-time fan of Lesley Manville and even I’ll admit to being won over by her likeable performance.  If looking for a simple reminder that good things can happen to good people, Mrs. Harris Goes to Paris is for you.