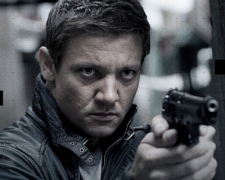 The late Robert Ludlam wrote three novels that took us into the world of secret agent Jason Bourne – The Bourne Identity, The Bourne Supremacy and The Bourne Ultimatum.  All three were adapted into cinematic form and it’s become one of my favourite movie franchises.  In each instance, we saw exciting, fast-paced action sequences interwoven with a credible, suspenseful plot.  It’s the ideal combination for anyone who loves a good conspiracy thriller.

Given that Ludlam’s books have now been adapted, the decision has been made to move this franchise in a different direction.  Writers Tony and Dan Gilroy were charged with the task of creating a new story that maintains the “essence” of the earlier films whilst given the audience something fresh.  In that regard, I think they’ve done an admirable job.

His name appears in the title (largely for marketing purposes) but you won’t see Jason Bourne in this instalment.  Both Matt Damon and director Paul Greengrass (who made the last two films) have decided to take a break from the series.  Bourne’s absence is explained by the fact his character has gone into hiding.  If anything, it at least keeps the door open for him to return down the track.

For those who remember the earlier films, Bourne was part of Operation Treadstone – a highly secretive CIA initiative where agents’ behaviours were modified with the intention of making them expert assassins.  Ah, but it wasn’t the only such program.  As we learn at the start of The Bourne Legacy, the CIA has another illegal operation hidden away.  Six agents are being provided revolutionary medication that improves their mental prowess and gives then a noticeable advantage in the field.

Unfortunately, the bad press that surrounded Jason Bourne threatens to expose this program and further damage the integrity of the CIA.  A retired U.S. Air Force Colonel, Eric Byer (Norton), has been brought in by the CIA and charged with the responsibility of cleaning up this mess.  His solution is straight-forward – shut down the program and eliminate these six agents before word gets out.

Five are killed.  One is not.  His name is Aaron Cross (Renner).  What follows is the intricate game of cat and mouse that we’ve come to expect from this series – one guy trying to outrun and outsmart those at the top of the CIA.  His only ally appears to be an experienced scientist (Weisz) who has been helping create the program’s performance enhancing drugs.

There’s a sense of familiarity about The Bourne Legacy that’s difficult to shake.  Whilst it’s great to see the series taking a chance and introducing new characters, this film does have a “seen it all before” vibe.  We’ve got the same cover-ups and conspiracies and they’re not advanced any further than they were in the earlier movies.

That’s not to say the film isn’t entertaining.  The finale too long but the chase sequences, shot in several countries, have been skilfully directed by Tony Gilroy (Michael Clayton, Duplicity).  I also enjoyed the scenes within CIA headquarters as we watch the “villains” strategize their plans to capture Cross.  It’ll again leave you wondering if there’s a strong element of truth to this tale.

Jeremy Renner (The Hurt Locker) can’t quite match the charm of Matt Damon in the leading role but it’s hard to fault his passionate, energetic performance.  Academy Award winner Rachel Weisz (The Constant Gardener) gets plenty of screen time herself (she’s not just a token love interest) and the duo share some well thought out conversations.

It’ll be interesting to see where the series goes next.  The idea of bring Damon and Renner together seems perfect.  It’s just a question of whether the money is available and if it can be arranged.

You can read my interview with star Jeremy Renner by clicking here.