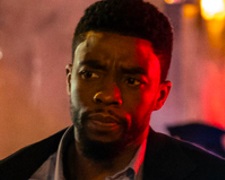 I’m a big fan of New York City but even I was sceptical on first seeing the trailer for 21 Bridges.  It shows a crime being committed followed by the police shutting down every single exit from the island of Manhattan to stop the perpetrators from getting away.  How is that logistically possible?  Wouldn’t the criminals have time to escape given their head start?  Couldn’t they find a decent hiding place given the size of the city?  What about the public disruption to the 2 million people going about their daily lives?

The answers to some of those questions are provided but the twist to this film is that the 21 bridges (that includes tunnels) are rather irrelevant.  There are a few minutes worth of flyovers that show these landmarks but the reality is that the bad guys don’t even go near them.  The crux of the narrative is set around key locations in Manhattan (such as Chinatown and the Meatpacking District) where the “heroes” try to take down the “zeros”.

The featured protagonist is Andre Davis (Boseman), an NYPD detective with a reputation for using his gun a little too often (although he’d disagree with that assertion).  He’s brought in when 8 police officers are brutally killed in a drug robbery gone wrong.  Time is of the essence and so he must rely on the support of a narcotics expert (Miller) and the team back at the station who are providing him with instant access to CCTV footage.

We also see events unfold from the opposing perspective.  Ray (Kitsch) and Michael (James) are the two guys responsible for the crime and it’s a struggle to avoid detection given the number of police officers involved and the fact their mug shots have been plastered across TV screens.  They’re an odd combination but they’re prepared to stick together with hopes of escaping the city and making a better life for themselves.

We’ve seen this storyline many times before and we’re likely to see it many times more.  There are early scenes involving Andre’s upbringing and his mother that are included to make his character look like a decent, honest guy (they weren’t necessary).  Once the investigation is in full swing, the characters rush from place-to-place with Andre having a magical “sixth sense” that allows him to foresee the criminals’ next moves.  There’s also a not-so-subtle hint that several cops can’t be trusted.

Director Brian Kirk has spent the last decade in television as part of shows such as The Tudors, Luther and Game of Thrones.  21 Bridges marks his feature film debut and while it can boast a strong cast with the likes of Chadwick Boseman (Black Panther), Sienna Miller (The Girl) and J.K. Simmons (Whiplash), it’s ultimately a very standard cop thriller.