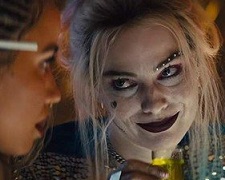 It was pitched as DC Films’ chance to outflank the ridiculously successful Marvel franchise (led by The Avengers).  Suicide Squad brought together a bunch of unpredictable villains and tried to create something darker and edgier.  It wasn’t a bad idea on paper but unfortunately, the end product was garbage.  The film scored just 27% approval from critics and 59% approval from the public on Rotten Tomatoes.  It still managed to turn a profit (reeling in $747 million at the global box-office) thanks to its pre-release hype, big-name cast and huge marketing campaign.

Warner Bros. Pictures hasn’t pulled the rip cord (just yet anyway) and they intend to keep the franchise alive.  A Suicide Squad sequel, slated for release in mid-2021, is in production although Will Smith (as Deadshot) and Jared Leto (as The Joker) won’t be returning.  To keep audiences engaged in the interim, a stand lone featured centred around Margot Robbie’s Harley Quinn is the latest comic movie to find its way into cinemas.

British screenwriter Christina Hodson (Bumblee) is quick to explain the absence of one key individual in Birds of Prey.  We learn in the opening scenes that despite their close attachment in Suicide Squad, Harley and The Joker have “broken up”.  She’s a little heartbroken but she’s open to the idea of a fresh start and new opportunities.

Unfortunately, she won’t get the chance to relax and think about her career arc.  There’s a VERY long list of people who are looking to get revenge against Harley given she no longer has the immunity that comes with being The Joker’s offsider.  It’s reminiscent of the John Wick movies in that seemingly everyone in Gotham wants to kill her and she must fight off every assailant with an array of weaponry.

That in itself isn’t enough to sustain a two-hour movie and so there’s a secondary storyline involving a teenage girl who has (a little too easily if you ask me) come into the possession of a valuable diamond with a secret inside.  A ruthless gangster (McGregor), who has an odd fetish for peeling off people’s faces, seeks the precious stone and has placed a large bounty on the girl’s head.

Birds of Prey provides another opportunity for Margot Robbie to showcase her talents and, for the most part, audiences will enjoy seeing the bipolar Harley Quinn create mayhem and carnage.  She’s got a one-liner for every situation (“nothing gets a guy’s attention like violence”), she looks like a walking rainbow, and she’s exceedingly unpredictable.  Given the abundance with which comic book movies are being churned out, Robbie deserves praise in creating a memorable character that differs from the norm.

The problem is the movie relies a little too heavily on Robbie when it doesn’t need to.  Mary Elizabeth Winstead (Gemini Man), Jurnee Smollett-Bell (Friday Night Lights) and Rosie Perez (Fearless) play characters who are just as interesting as Harley Quinn but instead of bringing them together sooner or delving deeper into their respective troubles, the film plays it safe by sticking with the lead and her semi-repetitious crises.

I’m still scratching my head about Ewan McGregor’s performance.  He’s trying to create a camp, quirky villain but it’s hard to imagine how he’s become so powerful given his poorly conceived plans.  There are moments when he’s as ruthless as Hannibal Lecter (such as a scene with a kidnapped family) as there are moments when he’s as clumsy as Doctor Evil (such as a scene where he lets Quinn escape).  It’s as if director Cathy Yan can’t quite decide on whether to go with a light or dark tone.

It’s better than Suicide Squad and it comes together nicely in the final 20 minutes but Birds of Prey doesn’t always make the most of its opportunities.