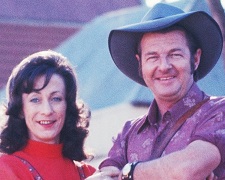 COVID-19 has battered the broader film industry but Slim & I is a rare example of a movie that is likely to benefit from the pandemic.  With the lack of big blockbusters coming out of Hollywood, this small Australian documentary is being released in roughly 150 cinemas across the country.  That’s a staggering number for a doco and, given the doom and gloom that has enveloped 2020, it’s the perfect film to put a smile on people’s faces and remind them just how great the world can be.

Most Aussies will be familiar with music legend Slim Dusty.  He recorded over 100 albums, he won 37 Golden Guitars, and he was the inaugural inductee into the Australasian Country Music Roll of Renown.  His first big hit, “A Pub With No Beer”, became an international hit in 1958 and that made him the first Australian to receive a Gold Record.  If you needed further proof of his iconic status, Slim was selected to sing “Waltzing Matilda” in front of over 114,000 people at the Closing Ceremony of the 2000 Summer Olympic Games in Sydney.

Slim & I recognises and celebrates Slim’s achievements but, just as importantly, it shines the spotlight on his partner (both personally and professionally) of more than 50 years, Joy McKean.  I like the line used by producer Chris Brown (The Railway Man) at the film’s Queensland premiere – “she wasn’t the woman behind the man… she was the woman beside the man.”  Slim may have been the “face” of the duo but behind the scenes, it was Joy who wrote the lyrics to some of his best works.

There’s a lot of material to cover inside of two hours and credit goes to director Kriv Stenders (Red Dog) and editor Karryn De Cinque (Girl Asleep) in weaving the interviews and footage together.  With this blessing of Joy McKean and the help of her grandson filmmaker, James Arneman, Stenders had access to a wealth of archival footage that had never been seen before.  A few parts had to be re-enacted (the weaker material in the movie) but for the most part, we’re seeing the real Slim and Joy travel across the country, create great music, and interact with an assortment of people.

The current day interviews with Joy (now 90 years of age) are both heartfelt and hilarious.  She’s still as sharp as a tack and she doesn’t mince her words.  We also hear from the likes of Keith Urban, Paul Kelly, Don Walker, Kasey Chambers, Missy Higgins.  If you need proof about the power of Slim Dusty and the song writing prowess of Joy McKean, you’ll love the story told by Troy Cassar-Daley about his favourite tune – “The Biggest Disappointment.”

Culminating on an uplifting, emotional note, Slim & I is a wonderful tribute to two people who made Australia a better place.