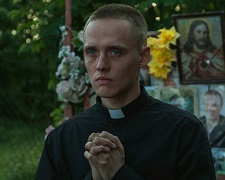 The 2020 Academy Awards will be remembered most for the achievements of Bong Joon-ho’s Parasite which, in addition to winning three other awards, became the first film not in the English language to win the top prize for best picture.  Given the hype and attention garnered by Parasite, it’s easy to overlook the other four great films nominated in the Best International Feature Film category.  Pain and Glory from Spain, Les Misérables from France and Honeyland from North Macedonia have already been released in Australian cinemas.

The final nominee, Corpus Christi from Poland, is now getting a run here in Australia and it rounds out a remarkable quintet of films that all deserve to be seen.  It’s the story of a young man, Daniel (Bielenia), who has spent time in a juvenile detention centre after being found guilty of second-degree murder.  It was there where he befriended a priest and learned the ways of Catholicism.  I wouldn’t describe it as a full transformation (he’s still a bit rough around the edges) but it’s clear Daniel has benefited from his dose of religion.

Now’s the part where it starts to get interesting.  Released from detention, Daniel is sent to a small town to work in a saw mill (it’s one of the few places where a convicted felon can find employment).  He doesn’t want to talk about his troubled past and so after meeting a young woman in the town’s local church, he lies and says he’s a freshly ordained priest who is travelling across the country.  That single falsehood sets in motion a chaotic series of events where Daniel becomes the parish’s new celebrant.

It might sound like a clumsy comedy but Corpus Christi is a powerful drama that has a lot to say about religion, forgiveness and redemption.  Yes, Daniel is a fraud but despite that and his criminal background, he arrives in the stuffy, gloomy town like a breath of fresh air.  His passion and energy helps unite some of the townsfolk (still grieving from a tragic event) whilst exposing the actions of those looking to create negativity and division (such as the town’s mayor).

When it’s all wrapped up and the closing credits are starting to roll, there’s plenty to sit back and ponder.  Who are the good people and who are the bad people in this tale?  Should mistakes from our past be allowed to dictate our future?  Who deserves forgiveness and who deserves retribution?  The quality cast, headlined by Bartosz Bielenia in the lead role, add greyness to their respective characters and you’ll have think deeply in answering these questions.

Poland is home to a healthy film industry with the population getting behind local productions.  The country makes roughly 40 feature films each year and they contribute approximately 30% to the total box-office – one of the highest percentages in Europe.  By comparison, Australian movies make up less than 5% of our annual box-office totals (highlighting our reliance on American blockbusters).

While most Polish films aren’t seen in Australian cinemas, exceptions are made when critical acclaim is strong.  Recent examples have included In Darkness, Ida and Cold War.  Corpus Christi can now be added to that list and it’s a worthy, memorable inclusion.