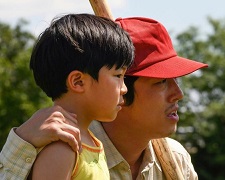 The United States of America has long been described as the “land of opportunity” and it’s why so many have been attracted to its shores.  More than 40 million people living in America right now were born in another country.  These people were lured by its economy, culture, health care, education, living space and, perhaps most importantly, its career opportunities.  It remains the top country of choice (by a significant margin).

There’s a seemingly endless number of real-life stories you could tell when it comes to immigrants in search of the American Dream.  A small number have been told on screen before as evidenced by In America, The Namesake, The Visitor, Brooklyn and Coming to America (the later offering a comedic perspective).  American writer-director Lee Isaac Chung adds a new title to the list with Minari – a tale loosely inspired by his own upbringing in Arkansas during the 1980s and the strong desire of his Korean father to create a better life for the whole family.

There’s division amongst the characters from the opening scene.  Tired of his job as a “chicken sexer” in California, Jacob (Yeun) has purchased a small farm in Arkansas which is to be the new family home.  He believes the property has the “best dirt in America” and his goal to grow niche Korean vegetables, sell them to local supermarkets, and watch the money roll in.  He’s finally working for himself as opposed to someone else.

His wife, Monica (Ye-Ri), is not as enamoured with the change.  She had no idea the farm would be so remote and she’s appalled by the old, leaky demountable they now must live in.  Money is also tight and she’s worried this venture, which requires significant bank borrowings, might see them end up in a worse position than beforehand.  Their arguments are often overheard by their two perceptive children, Anne (Cho) and David (Kim), who sense the family may soon split apart.

If you’re a fan of the film, you’ll probably describe it as “patient” and if not, you’ll refer to it as “slow”.  It’s an observational, skilfully acted drama where we watch these characters go about their daily lives (the perspective continually changes) and there isn’t much in the way of action and surprise.  Jacob gets help on the farm from a heavily religious man (Patton), Monica invites her Korean grandmother (Yuh-jung) to move in with them, and the two kids try to make friends at a nearby church.

As the days pass, the connections between the characters evolve.  By pouring so much time and energy into his work, Jacob has become blinkered to the negative impact his fatherly absence is having on the rest of the family.  Grandma Soon-ja steps up to fill the parenting gap and she slowly wins the affections of the 7-year-old David.  The interaction between these two is one of the film’s biggest strengths.

Minari earned the Sundance Film Festival’s Grand Jury Prize back in January 2020 and the acclaim has continued through to the current awards season.  It picked up three Screen Actors Guild Award nominations (including best cast) and you’re likely to be hearing it mentioned again when the Oscar nominations are announced in mid-March.