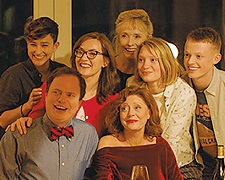 There are hypothetical question that many will have thought about and discussed with friends.  What would you do if you won $50 million in the lottery?  Could you survive on a deserted island like Tom Hanks did in Cast Away?  If you could have one super power, what would it be?  Blackbird poses a heavier question to reflect upon – if you knew you only had one month left to live, how would you spend the time?

It’s the situation that a grandmother, Lily (Sarandon), is forced to answer after being diagnosed with a fast degenerative disease that will soon take her life.  She’s a stubborn individual who doesn’t like showing signs of physical weakness but she’s clearly struggling.  Basic tasks – such as walking down stairs, opening a box or holding a wine glass – now require more time and more concentration.  Her doctors have said it will only get worse over the coming weeks.

With the help of her long-time husband Paul (Neill), Lily has organised one last family get-together at their idyllic beachside home.  Attending will be her two daughters (Winslet and Wasikowska), their respective partners (Wilson and Taylor-Klaus), her lone grandson (Boon) and her long-time friend (Duncan).  The afternoon starts out simply with crossword puzzles and charades and it’s followed by a beautiful dinner with great food and copious amounts of alcohol.

As you can imagine, the event is a mix of both happiness and sadness.  Everyone is putting up a brave face but it’s impossible to avoid the elephant in the room.  There are moments of humour as demonstrated in a scene where family members discuss whether it’s appropriate to buy Lily a farewell gift.  There are moments of tenderness such as a conversation where Lily gets her grandson to open up about his dreams for the future.  There are moments of raw emotion as characters struggle to hold back the tears knowing what lies ahead.

The one-on-one stuff is nice but the film is weakest when it brings all the characters together and succumbs to unnecessary melodrama.  It’s one of those movies where secrets come into the open, family members say what they really think about each other, and arguments then ensue.  There’s little subtlety to these scenes with the likes of Kate Winslet (The Reader) and Australian Mia Wasikowska (Alice in Wonderland) being asked to overplay their roles.

Directed by Roger Michell (Notting Hill, Morning Glory) and based on a 2014 Danish film (Silent Heart), Blackbird isn’t perfect but it presents an interesting scenario that’s worth exploring.