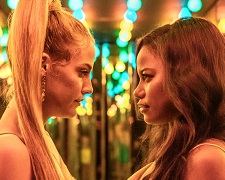 I’ve often made reference to unusual forms of inspiration that spawn a movie. Pirates of the Caribbean remains the high-water mark – a $4.5 billion USD franchise stemming from a 1960s amusement park ride. Zola won’t match that box-office but it too comes from quirky origins. An unknown stripper posted some tweets, they went viral, Rolling Stone published an article, and now the whole story has been adapted for the big screen by writer-director Janicza Bravo alongside co-writer Jeremy O. Harris.

I’ll quickly summarise the story but will employ less colourful language as that used in the original 148-tweed thread. Two strippers meet for the first time in Detroit and then go on a whirlwind Florida road trip, accompanied by a clingy boyfriend and a dodgy pimp, to hit up some lucrative strip clubs and make bigger cash. Told through the eyes of the group’s newcomer, Zola (Page), the trip doesn’t go to plan and involves dingy hotels, prostitution, physical altercations, stolen money, guns and a second-story balcony.

The second of the two strippers, Stefani (Keough), is a ball of extraverted energy who seemingly never stops talking. She’s the perfect analogy for the film itself. Framed as a dark comedy and with a run time of just 90 minutes, Zola feels like it’s pitched at those with short attention spans. It’s a wild, crazy ride that starts quickly, moves quickly and finishes quickly. The fast-paced editing, exemplified by a scene where Stefani prostitutes herself with several men, contributes to this vibe.

Zola is the second feature film from 40-year-old American director Janicza Bravo. She’s caught the eye of many given both films, Lemon and now Zola, premiered at the Sundance Film Festival. The end result shows she has a great sense of humour (highlighted by a Whoopi Goldberg joke) and knack for bringing the best out of her actors. I also admired the splashes of creativity such as a simple scene involving a bouncing basketball.

Taylour Paige (Ma Rainey’s Black Bottom) and Riley Keough (American Honey) are both very good in the leading roles. In keeping with the themes of the film, they have fun with the characters while also showing us an uglier, seedier side to the United States that you won’t find on postcards. I was expecting a touch more from the finale but you should still give this a look.