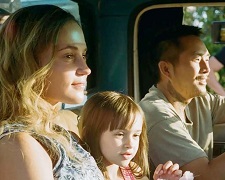 Blue Bayou is a fictional story based on thousands of true stories. Writer-director Justin Chon first learned several years ago that Korean American adoptees were being deported from the United States because of a shocking technicality. During the 1970s and 80s, many Korean children were adopted by American families.

Despite the adoption being legal and despite being raised in the US for almost their entire life, these now fully grown adults faced deportation today because they were not protected by the Child Citizenship Act of 2000. That piece of legalisation, approved unanimously by both the House and Representatives and the Senate, only covered those aged 17 or less when brought into law in February 2001.

It’s head-scratching to think about. Imagine being deported back to a country where you have no home, no job, no family, no friends, and no memories? While accurate figures don’t exist, The National Council of Adoption estimates there are between 15,000 and 18,000 people brought to the US as legal adoptees who do not have American citizenship. Most don’t realise until they need to apply for passports, driver’s licences, or social security cards. The political willpower to change the legislation hasn’t been forthcoming.

In addition to his writing and directing duties, Chon takes on the lead role of Antonio LeBlanc, a Korean-born man who was adopted as a 3-year-old and brought to the United States by his new family in 1988. He didn’t have the best upbringing but he’s left that behind and is trying to forge a better life with his wife, Kathy (Vikander), and his step-daughter, Jessie (Kowalske). They’re a happy family but money is tight. Antonio works as a tattoo artist while Kathy is a rehabilitation nurse.

It all goes awry when Antonio is arrested by two not-so-nice cops with one of them being Kathy’s vengeful ex-husband who is unhappy with the lack of visitation rights involving his daughter. It’s at this point where Antonio is brought to the attention of U.S. Immigration and Customs Enforcement (ICE) and is set to be deported. His only chance is to plead his case before the courts but it’s an expensive exercise with high stakes. If he loses, he will never be allowed back into the country again and it could separate him from his wife and child.

Blue Bayou is an eye-opening movie with a flawed, interesting protagonist. You can’t help but feel sorry for Antonio (he’s trapped in such an awful, helpless situation) but there are times when, as part of his desperation, he becomes his own worst enemy. For example, he steals motorbikes to help pay his legal bills but solving one problem only creates another.

A few parts to the finale feel overly melodramatic (like a late scene where an injured Antonio rocks up on Kathy’s doorstep and doesn’t offer an explanation) and a subplot involving a terminally ill Vietnamese refuge (Pham) feels undercooked but Blue Bayou is still an important story that hits you in the feels and needed to be told.