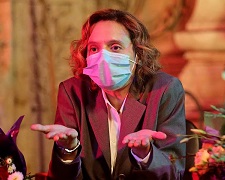 Writer-director Radu Jude hits you from the opening scene. Rather than skirt around the subject, he shows the sex tape in detail. It’s some of the most explicit stuff I’ve seen in a mainstream film but it’s not intended to be gratuitous. It allows audiences to see exactly what the parents and students have seen and decide for themselves if anything is wrong with it. How would you react if your teenage child had seen a similar sex tape involving their teacher? Who bears responsibility?

Jude’s 106-minute film is split into three very different parts. The first act follows Emi walking through the streets of Bucharest where she talks on her phone, gets into an argument with a driver, and does a bit of shopping. There’s not a lot of dialogue but it’s still an inspired way to learn about the character. The camera is often kept at a voyeuristic distance and it helps us appreciate that while Emi is dealing with a very serious matter, she’s just an ordinary person. It provides a nice view of Bucharest also.

The second part is a 20-minute interlude that answers a question no one has asked - could you turn the dictionary into a movie? Jude throws a bunch of words on the screen and then, using a mix of visual images and subtitles, explains his interpretation of each. There’s no rhyme or reason to it. Did it offer something? I don’t know.

The whole meeting is farcical. The attendees are deciding the future of a loyal, hard-working teacher and yet they’re talking over the top of each other and letting their mobile phones ring throughout. There’s another darkly funny moment where you can hear the sex tape in the background (it’s being shown to a late arrival) while someone else has the floor and is trying to make a serious point. The ending (which I won’t spoil) is as insane and as memorable as everything which precedes it.