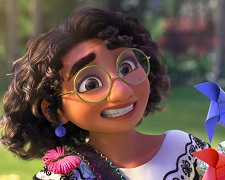 We should celebrate our differences.  It’s not a new message but it’s the key one driven home in Encanto, the latest effort from Walt Disney Animation Studios.  It’s set in a small, happy-go-lucky village in the forests of Colombia where every resident is given an enduring superpower when they lay their hands on a special candle.  For example, Luisa has infinite strength, Isabela can make flowers bloom, and Antonio can speak to animals.

It’s been that way for fifty years but cracks, both physically and metaphorically, are starting to appear in this idyllic world.  Trouble began when a young woman, Mirabel (Beatriz), undertook the gala touch-the-candle ceremony and came away with nought.  She puts up a brave, smiling face but deep down, her insecurities have taken hold and she can’t understand why the candle didn’t bless her with a magical power.

Things get complicated in the film’s second act where Mirabel speaks to a variety of people in search of answers.  These include her mother, grandmother and two sisters.  The individual offering the most insight is her ostracised uncle, Bruno (Leguizamo), who has not-so-bright visions of the future and the role that Mirabel will play in it.  Will these visions translate into reality?

Encanto could be described as a quasi-musical in the sense that while most of the dialogue is spoken, there are a handful of moments where characters break out into song.  The lyrics sprang from the mind of Lin-Manuel Miranda (Hamilton, In the Heights) and the music was crafted by Germaine Franco (Coco).  Given the setting, traditional Colombian folk instruments were used including a three-stringed guitar and a flute made from dried cactus.

The most interesting element of the storyline is the house they all live in – a dual-story dwelling that feels like a living creature as it too is infused with magic.  No servants are required given the windows open automatically, the table sets itself of a morning, and the internal stairs transform into a slippery slide to entertain the kids.  The rattling of the tiles, both on the roof and on the floor, also creates a cool sound effect.

I wasn’t as impressed with the characters.  The supporting players are tiresomely one-dimensional and when it comes to the leads, particularly Mirabel and her heavy-handed grandmother, the tension created doesn’t ring true.  Again, you can see the themes being pushed but petty arguments over superpowers and an eternally burning candle struggle to generate much in terms of emotion and heart.

There’s enough to entertain younger audiences but I’m not convinced Encanto will be remembered as a Disney classic.