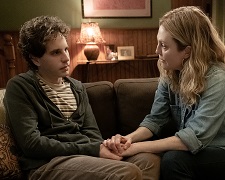 The internet has been flooded with tributes over the past week in recognition of iconic composer and lyricist Stephen Sondheim who passed away at the age of 91. On accepting a Tony Award in 1972 (he won eight in total), Sondheim quoted playwright David Trainer in reminding people that theatre, unlike television and movies, “is the only medium that acknowledges the presence of the audience.”

It’s part of the reason why Manhattan in New York City is one of my favourite places on the planet. Between 41st Street and 54th Street, you will find 40 theatres that hold audiences of up to 2,000 people. Tickets can be pricey but you have the opportunity to see some of the world’s finest actors perform live and, if you’re lucky, you can nab their autograph on your complimentary program and say “you were awesome” if you wait outside the stage door after the show.

Given it had won the Tony Award that year for best new musical (beating out Come from Away), I made sure to catch Dear Evan Hansen at the Music Box Theatre when visiting New York in July 2017. I described it at the time as “gut-wrenchingly beautiful with an incredible lead performance from Ben Platt.” Writer Steven Levenson crafted a complex narrative with an anti-social leading character, and musicians Benj Pasek and Justin Paul (La La Land) added distinctive songs which amplified the film’s key emotions.

Two downsides of theatre are (1) not everyone can jump on a plane and head to Broadway / West End to see a much-hyped new show, and (2) once you’ve seen it, you must rely on memories of the experience (or perhaps listen to the soundtrack a few times). With Dear Evan Hansen now adapted into a movie by director Stephen Chbosky (The Perks of Being a Wallflower), the opportunity exists for new audiences to discover this acclaimed musical and for existing fans to relive it.

The story is centred on Evan Hansen (Platt), a 17-year-old introverted high school student who has no good friends and is seeing a therapist to help deal with depression and social anxiety. A convoluted series of events then upend his life. A fellow student, Connor Murphy (Ryan), commits suicide and in the aftermath of the tragedy, Connor’s parents erroneously believe Evan was one of their son’s best friends. Evan goes along with the ruse (he doesn’t want to upset the parents further) but when welcomed into the Murphy family and asked detailed questions, the lies become bigger and a reluctant Evan isn’t sure what to do next.

While there’s no true substitute for quality live theatre, Chbosky does an admirable job translating the energy from the stage show and bringing it into the movie. Hollywood tends to favour big, colourful, loud, well-choreographed musical numbers with huge ensembles. Dear Evan Hansen leans in the opposite direction. This is particularly evident in an early scene involving Connor’s parents (Adams and Pino) and sister (Dever) as they agonise over their son’s death (the song is entitled “Requiem”).

Using cinema as a storytelling medium also affords the director with further options and to illustrate, Chbosky weaves well-timed flashbacks into the narrative to provide additional background to the characters. Connor’s sister, played wonderfully by Kaitlyn Dever (Booksmart), is an example of someone who gets more attention and hence, feels like a clearer, more fulsome individual. I’m not sure it was necessary but small changes have also been made to the finale to soften the harder edges.

A few have been critical of the film’s messages and others have questioned using a 28-year-old to play the lead teenager (despite the fact Platt is reprising the role he made famous on Broadway). While there is some merit in those barbs, Dear Evan Hansen still holds up as a darker musical about grief, depression, families, social media and redemption.

You can read/listen to my chat with director Stephen Chbosky by clicking here.