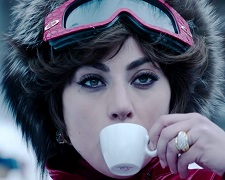 With roughly 500 stores around the world and generating close to $10 billion Euro each year in revenue, Gucci is one of the world’s most recognisable fashion brands.  Its distinctive “double-G” monogram recognises the company’s founder, Guccio Gucci, and was developed by his son, Aldo, in 1933.  You’ll find it on most iconic Gucci items – from belts and shoes to handbags and scarves.

Director Ridley Scott (Gladiator), drawing on a screenplay from writers Becky Johnston (The Prince of Tides) and Roberto Bentivegna, covers a tumultuous period in the organisation’s history between 1978 and 1995.  The family business was now in its third generation and there were fights over control, strategic direction, designers, and money.

The film revolves around five characters.  Brothers Rodolfo and Aldo Gucci (Irons and Pacino) are co-owners of the firm founded by their father.  They each had a son would become part of the business – the flamboyant Paolo (Leto) who wants to bring his own style to Gucci’s brand, and the semi-reluctant Maurizio (Driver) who isn’t sure if he should take an active role.  Guiding Maurizio is his ambitious wife, Patrizia (Lady Gaga), a socialite with expensive taste.

Highlighting the pitfalls of family-run businesses, the problem with House of Gucci is its focus on the wrong people.  The bulk of screen time is devoted to Maurizio and Patrizia.  He’s a boring guy who goes through some quick-fire personality/love changes with little explanation.  Just because he’s rich and (arguably) successful, doesn’t make him interesting.  She’s a one-note, conniving “villain” looking to dominate all those around her.  Adam Driver (Marriage Story) and Lady Gaga (A Star is Born) are proven actors but I tired of the repetitive interplay between the pair.

The two most appealing characters are relegated to supporting status.  A deliberately over-the-top Jared Leto (Dallas Buyers Club) has fun with his portrayal as Paolo while Al Pacino (Scent of a Woman) relishes the chance to play a chatty, melodramatic individual in telling Aldo’s story.  They liven things up but we don’t see them enough across the film’s lengthy 158-minute run time.

The reactions since the film’s release have generated a few laughs.  Heirs to the Gucci family, who were not consulted prior, described it as “an insult to the legacy on which the brand is built today.”  If anything, those comments will only add fuel to the public’s interest.  Once you’ve seen the movie, you’ll realise it was never intended to be a gritty, blow-by-blow documentary.  The filmmakers have taken real life events and turned them into something satirical and comedic for the entertainment of audiences.  I’m okay with that.