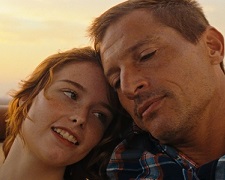 Writer-director Sean Baker has a knack for finding/creating interesting characters we won’t often see on screen.  Tangerine (2015) was about a transgender sex worker looking for love and friendship, and The Florida Project (2017) was the story of a poverty-stricken mother and daughter living in a rundown hotel next to Disney World in Florida.

Baker was tapping into another curious subject, drug-user activism, but that bigger project was canned in early 2020 when COVID-19 took hold.  Not content to sit at home in Los Angeles and “ride out” the pandemic, Baker was able to dust off an old idea and make a smaller-scale movie in Texas.  The budget was a measly $1 million USD and so it was shot with largely non-professional actors, a tiny crew, and no rehearsal time.  It’s title?  Red Rocket.

Mike interacts with several supporting players in Red Rocket and it’s through these exchanges that we form a more complete view of who is really is.  When telling industry tales to his porn-loving neighbour (Darbone), Mike’s narcissistic tendencies are on fully display.  He deludedly sees himself as a “celebrity” and upon finally meeting someone who can feed that view, latches on and uses it for his own gain.

It’s different when Mike is around his estranged wife, Lexi (Elrod), because he doesn’t have the upper hand.  She takes convincing but lets him stay temporarily in her home provided rent be paid.  Like a skilled telemarketer, Mike is forever pleading his sob-story case but, as Lexi has known him for so long, she sees through most of his bullshit.  That’s not to say she doesn’t have moments of weakness which he is able to exploit.

It’s funny to think such a great movie wouldn’t have been made if not for the pandemic.  Red Rocket has earned much critical acclaim since its Cannes Film Festival premiere and star Simon Rex was recently awarded the best actor prize by the Los Angeles Film Critics Association.  It’s hard to fault Rex’s performance and his convincing portrayal of an individual who is both intriguing and irritating.

Not pushing any profound messages or viewpoints, Red Rocket is an absorbing character study that asks us to look at Mike and then reflect on our own existence.  I like the approach.