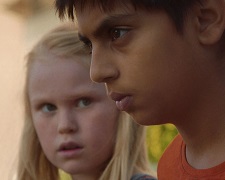 There are some terrific coming-of-age films about kids wising up to the world and discovering the importance of great friendships.  They span an array of genres include adventure (The Goonies), horror (It), fantasy (Harry Potter), comedy (Ladybird), drama (The Perks of Being a Wallflower), and animation (Toy Story).  I’m not sure where it fits but I’d throw Bridge to Terabithia in there too as a personal favourite.

The Innocents is an engrossing Norwegian flick that espouses the same messages but does so with a chilling splash of science fiction.  It’s like a superhero movie but without all the formulas and expensive action scenes.  It begins innocuously enough with 9-year-old Ida (Fløttum) befriending two kids of a similar age from her neighbourhood, Ben (Ashraf) and Aisha (Asheim).  Rounding out the friendship group is Ida’s autistic older sister, Anna (Ramstad), who struggles to communicate.

Growing up can be a challenge.  That’s no huge revelation.  The catch here is that these four children have a mix of telekinetic and mind reading skills which their parents know nothing about.  It sounds cool but given they’re immature children still learning the difference between right and wrong, the stakes are high and the consequences are higher.  It’s one thing for a bully to push someone over in the playground… it’s another to have the bully tap thoughts and control the other’s physical actions.

The Innocents will keep audiences on their toes.  You’re never quite sure where it’s heading and it’s not afraid to go down dark, heavy, confronting paths.  Writer-director Eskil Vogt has found four gifted young actors who take on the challenging material and deliver credible performances.  They act like kids and that’s a major reason why, despite the supernatural elements, it feels like a gritty, authentic story.

If this was a commercial, X-Men style movie, you’d have mature adults teaching them how to harness their abilities and a nasty villain for them to team up and defeat.  As alluded to above, this isn’t that kind of movie.  The parents are seldom seen and so it becomes a simpler, more interesting tale about power dynamics, both physical and metaphorical, amongst the children.

Vogt is better known for his writing credits and he was recently nominated at the Academy Awards for co-writing The Worst Person in the World alongside director Joachim Trier.  The Innocents is just his second effort as director (after Blind in 2014) and shows his skills with a camera and just as strong as those with a pen.  It’s the kind of movie you won’t easily forget.