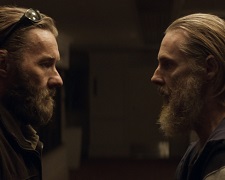 I have a good friend who played a key role in the hunt for Daniel Morcombe’s killer and, based on his telling of the story, it’s obvious that it serves as the inspiration for this new Australian drama.  The idea evolved several years ago when actor-filmmaker Joel Edgerton (Boy Erased) optioned the 2015 non-fiction book from author Kate Kyriacou that chronicled the elaborate police operation which ultimately led to a confession and conviction.

Writer-director Thomas M. Wright (Acute Misfortune) was then brought in for the difficult challenge of adapting it for the big screen and several key decisions were made in those early stages.  Firstly, Wright went with a fictionalised narrative which is “based” on the true story.  The most obvious difference is the changing of names (it doesn’t mention the Morcombe family in any way) but other alternations were made in terms of the investigation’s specifics.

Another important creative choice was the decision to focus solely on the “sting” and nothing else.  There’s no depiction of the murder, the immediate aftermath, the family’s grief, the inquest, and the attention in the media.  When the film begins, we’re following an undercover police detective (Edgerton) tasked with becoming friends with someone suspected of the murder (Harris) that took place several years ago.

I like the narrow approach as it allows Wright’s film to highlight the immense work ethic of the undercover detective and the emotional toll it took on his own life.  We’re talking about an intelligent, fast-thinking man who had to put his regular life on hold, pretend to be part of a fake crime gang, and befriend a scumbag suspected of murdering a boy.  This went on for several months with no definitive timeframe.  It could have all amounted to nothing if he said the wrong thing, or the suspect kept his mouth shut.

Joel Edgerton does a commendable job fleshing out the character but I wish there were more opportunities for him to open up to fellow officers/detectives and describe his approach and psyche.  English actor Sean Harris (24 Hour Party People) is terrific as the suspected murderer and depicts him as someone lacking intelligence but also emotionally guarded.  The supporting players pull their weight with emphasis on Jada Alberts as a detective working behind the scenes to put the pieces together.

The Stranger premiered out of competition at the Cannes Film Festival back in May and was criticised by the parents of Daniel Morcombe as “making money off a heinous crime.”  They’re entitled to publicly air such concerns but having now seen the film myself, I believe it respectfully covers the scenario and, despite the heavy subject matter, appropriately pays tribute to hard-working police detectives who deal with cases just like this on a regular basis.