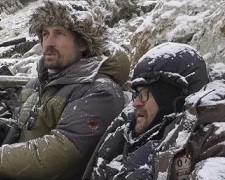 The Velvet Queen is a documentary brought together by the talents of three key people.  Vincent Munier is an award-winning wildlife photographer with over 100,000 followers on Instagram.  Sylvain Tesson is an acclaimed non-fiction author who writes about his travel adventures.  Marie Amiguet is a French filmmaker co-directing (alongside Munier) her first feature film.

Together, they trekked deep into the Tibetan highlands in 2018 to explore the terrain and its unique wildlife.  Roughly 150 hours of footage was shot with the best material woven together into a tight 90 minutes.  Dialogue is used sparingly (a good choice) and that leaves the emphasis on the visuals, sound and music.  It’s a French production but there’s an Australian link with Nick Cave and Warren Ellis (The Road) collaborating to create the music score.

The film is as much about the creators as it is about the landscape and the animals.  Just like a medical researcher, their days are full of educated guesswork and experimentation.  The trio find a good spot, sit there for hours in the freezing cold (you can see their breaths), and hope to get the perfect photograph of a colourful bird or a hairy mammal.  On this particular trip, the “holy grail” would be to capture the movements of a snow leopard, a reclusive, endangered beast which skilfully uses the rugged terrain to keep a low profile.

If you’re interested in the subject matter, The Velvet Queen has plenty to offer.  As an example, Munier recounts a story from a previous trip where he took a seemingly innocuous photo of a bird only to discover something much more interesting when looking at the photo a few months later.  Humour is provided in a later scene where Munier and Tesson, trying to stay as quiet as possible, are interrupted by a group of noisy Tibetan kids who want to play with their equipment.

This isn’t a life changing doco but it reminds us of the many beautiful, fascinating animals we share the planet with.  It’s easy to forget given how preoccupied we often are with our day-to-day lives.  There’s no substitute for the real thing but the filmmakers do a great job making us feel like we’re alongside them.  They open up about what it’s like to be in one of the most isolated parts of the world and fully detached from the “human rat race” to which we’re all accustomed.  The Velvet Queen is a relaxing, comforting watch.