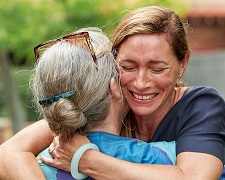 A film that’s long stuck in my memory bank is Penny Marshall’s Awakenings, a 1990 drama that earned an Academy Award nomination for best picture.  It followed a physician (Robin Williams) who used an experimental drug on catatonic patients to “bring them back to life.”  I wouldn’t have believed it if not knowing it was a true story.  What if you were asleep for 30 years and then suddenly woke up?  How easy would it be to reconnect with family and to understand all that has changed in the world?

A similar idea is explored in June Again, an Australian film with Noni Hazlehurst in the title role.  June suffers from dementia (the effects of a series of strokes) and has spent her last few years living in an aged care facility.  She no longer remembers her family and she struggles to recall simple words.  The introductory scenes bear a curious resemblance to Florian Zeller’s The Father in that we see things through June’s confused eyes and it’s hard to work out what’s real and what’s not.

And then... a miracle happens.  June wakes up unexpectedly one morning with her memory restored.  She reads staff name tags, she completes a crossword puzzle, and she asks questions about her family.  Writer-director JJ Winlove goes with a not-so-heavy-handed approach and plays these moments for laughs.  Now that June’s full personality is on display, we see she’s a feisty, funny woman who loves to exert dominance.  She bluffs a security guard, sneaks out of the aged care home, and sweet-talks a taxi driver into giving her a free ride.  The end result - June is on the loose!

There are a handful of interesting misadventures (such as a moment where June befriends a young music student) but at its heart, June Again is the tale of someone effectively “coming back from the dead” and the impact it has on close friends and family.  On realising how much her two grown children have underachieved (at least in her opinion), June re-establishes herself as the meddling matriarch and is quick to dispense advice.  Her heart is in the right place but there are times when her ignorance of recent events and her general stubbornness cause more harm than good.

There’s a bit too much going on at times.  The weakest subplot involves June involving herself in family’s wallpaper production business and dishing out ideas.  Would she not have higher priorities to worry about?  The better stuff, and this a credit to the fine performances, are the squabbles between June and her two kids (exemplified by an awkward “intervention” where the son arrives with a six-pack of beer).  Hazlehurst wins the majority of laughs while a subdued Claudia Karvan and Stephen Curry are required to take things more seriously.  It’s a nice balance.

As fantastical as this scenario may appear, you grow to care about these three characters and their fate.  If there was any doubt, the film’s emotional punchline provides confirmation.  A feel-good movie about dementia?  June Again is a winner.