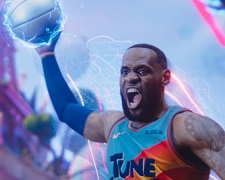 Cinema has always been a mix of art and commerce.  There are actors, filmmakers and craftsmen who are willing to work for free (or close to it) if it gives them creative control and the chance to make something distinctive, meaningful and personal.  On the flip side, there are big Hollywood studios who are focused largely on box-office figures and who will use their influence to make casting and script decisions that maximise ticket sales.

The storyline borrows from formulas utilised in the last film.  NBA star LeBron James (in what I hope isn’t a reflection of reality) portrays himself as a close-minded dad trying to push a basketball career on his not-so-willing son, Dom (Joe).  When he witnesses his son mucking around on the backyard court of their multi-million dollar home, a deadpan LeBron is quick to pull him into line and offer groan-inducing motivational quotes like “you can’t be great without putting in the work.”  For whatever reason, LeBron can’t see that his son is a computer programming prodigy who would rather make video games about basketball than play it professionally himself.

Anyway, through a convoluted series of events involving Warner Bros. executives, LeBron and Dom find themselves sucked into a Tron-like computer world run by the villainous Al-G Rhythm (Cheadle).  He divides the pair and sets up a basketball game that will decide the future of the human race.  LeBron and the Looney Tunes, headlined by Buggs Bunny, take on some of the best players in the world in the Dom-designed video game.  If they’re not in front when the final buzzer sounds, LeBron, his family, and millions of spectators (bizarrely including Pennywise from It) will be trapped in the computer world forever.

Don Cheadle isn’t too bad as the villain and the special effects crew deserve credit for seamlessly blending the animation and live action.  That’s all I have in terms of positives.  The dull, simplistic script limits any potential for this film to become something more fun, more interesting.  The only message (“just be yourself”) is rammed home ad nauseam and the climactic basketball game, with a curiously low scoring final quarter, drags on forever (it’s close to half the entire movie).

The original Space Jam is looked back at fondly but I don’t think this inferior sequel will be held in the same regard.