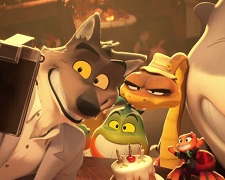 Don’t judge a book by its cover.  It’s a message that’s pushed very, very, very strongly in The Bad Guys, the latest animated feature from Dreamworks.  Those looking for nuance will be disappointed but, given this is targeted largely at kids, the focus is on a simple storyline with cute, fun characters.  It’s like a Looney Tunes cartoon except with better production values.

We meet these “bad guys” in a quick-paced introduction.  Wolf (Rockwell) is their cunning leader, Snake (Maron) is a master safe-cracker, Tarantula (Awkwafina) is a renowned computer hacker, Shark (Robinson) is a master of disguise, and Piranha (Ramos) is willing to fight anyone.  Not afraid to rob a bank or steal precious artifacts, they’re described as the “most diabolical criminals of our time” and they wear it like a badge of honour.  To use Wolf’s own words – “we may be bad… but we’re so good at it.”

The argument put forward is these five characters are bad… because that’s what society expects of them.  People are naturally afraid of wolves, snakes, spiders, sharks, and piranhas and so they never had a chance to begin with.  What if there was a way to break the stereotype, give them a fresh start, and turn them into “good guys”?

The team is arrested after a botched robbery at the aptly titled Gala for Goodness and they’re fortunately provided a rehabilitation opportunity by the generous governor.  Instead of sending them to the slammer, she hands them over to the much-loved guinea pig, Professor Marmalade (Ayoade), who will put them through a series of tests and make them better creatures.  He’s out to prove there’s a little bit of good in all of us.

As the central figure, Wolf seems to be channelling the mantra of Jack Sparrow in the Pirates of the Caribbean franchise.  You never know which side he’s playing (sometimes he doesn’t know either) and he continually changes his persona to fit each situation.  Does he truly want to be good?  Or is it all part of the “most relaxing con ever”?  His views are sharpened during a predictable, semi-rushed finale.

There’s a local connection with the movie based on a children’s book series first released by Australian author Aaron Blabey in 2015.  He’s now published more than a dozen books about these characters which highlights their popularity around the world.  Websites state a recommended reading age of 6-12 years old which fits with what we see on screen.

Production values are strong and it’s easy to see kids engaging with these villains-turned-heroes.  The voices have been astutely selected with the distinctive Sam Rockwell, Awkwafina and Richard Ayoade standing out as the best of the bunch.  Alex Borstein also rates a mention as the city’s emotional police chief.

I’d have preferred a narrative with more complexity but The Bad Guys knows its audience and knows what it’s trying to sell.  One for the kids.

You can read my chat with the book's author, Aaron Blabey, by clicking here.